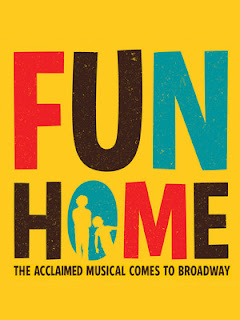 I saw Fun Home last night, a few months after it won the Tony Award as best musical. I thought I was a little late in getting to it, but the original cast is still together, and the show is as powerful as it was when it showcased at the Public Theater downtown on Lafayette Street. I particularly enjoyed the chamber musical ensemble, which was the perfect accompaniment to what is essentially a musical largely assembled from private scenes and recollections. Fun Home is a modern, chamber opera about the coming of age of a lesbian graphic novelist, her closeted gay father, and her dysfunctional family. Written by Jeanine Tesori and Lisa Kron, and based on Alison Bechdel's autobiographical story, the show features stellar performances headed by Michael Cerveris in a Tony Award winning performance as the father, and child actress Sydney Lucas as the young Alison Bechdel.

This week, a new musical opened on Broadway: Hamilton. Like Fun Home this show, a musical tribute to our nation's Founding Fathers, also started humbly at the Public Theater where it soon became the hot ticket in town. It has moved to the Richard Rodgers Theater and it continues to be the show that you just have to see. Lin-Manuel Miranda who wrote the memorable Tony Award winner In the Heights (which also played at the Richard Rodgers Theater) is the author and star of this new work which takes the story of political figures (who have been immortalized in marble statues, and whose likeness adorns our money) and brings it back to the realm of mortality. History might have immortalized them, but this show remind us that they were just angry young men with a driven political purpose. To this end, the score, a mixture of hip-hop, rap and pop, is the perfect musical idiom to tell the story of these youthful trailblazers. The fact that they are largely played by black and Hispanic performers makes this work groundbreaking on many different levels. 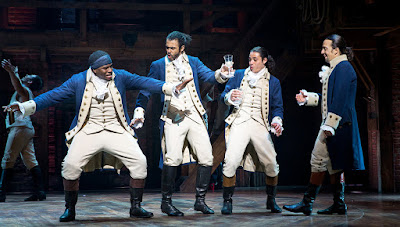 Thankfully, I managed to get tickets.  But I couldn't get in until mid December. At least I will see this show with its original cast, months before the next Tony Award ceremony. I predict that it will be nominated for all major awards, and it will be a winner in many if not all categories.  From all the reviews that I have read this is the musical that will be featured in the history books of the great landmarks of the American musical theater.  I'm not sure if Mr. Miranda planned on ending up in a history book (for a show that desperately debunks history) but that is, oftentimes, the irony of success.
Posted by Vincent Vargas at 2:23 PM