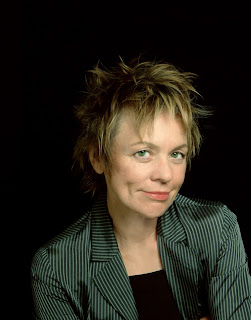 A recent press release from the Film Society of Lincoln Center reveals that Laurie Anderson has been commissioned to design the poster for the 53rd New York Film Festival. The yearly cinematic event will run from September 25 to October 11, and, as usual will feature films from around the world, as well as major releases from American studios.

Ms. Anderson is one of the most daring and creative personalities in the arts. She is best known for her gigantic multimedia presentations as well as her cutting-edge use of technology. She has been a director, writer and composer of works that span theater, performance art and experimental music. Her upcoming installation called Habeas Corpus will be at the Park Avenue Armory from October 2-4.

Below is the poster that Ms. Anderson has created for this year's New York Film Festival. 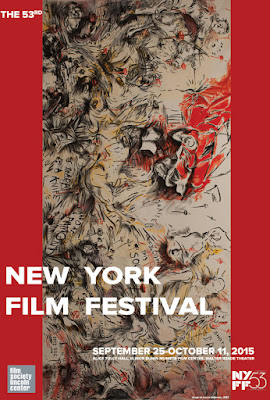 Regarding the poster, Ms. Anderson revealed “The NYFF is such an eclectic and ecstatically wild mix of films, and I wanted to try to capture some of the variety of subjects and styles. The original piece this is is based on, Follow the Sound, is 18 feet long with lots of plots and characters and fragments. I made this painting two years ago when I was feeling especially inspired by the scale of projected film and the possibilities of abrupt jump cuts. I’m so happy it’s the poster for this year’s festival.”
Posted by Vincent Vargas at 10:49 AM