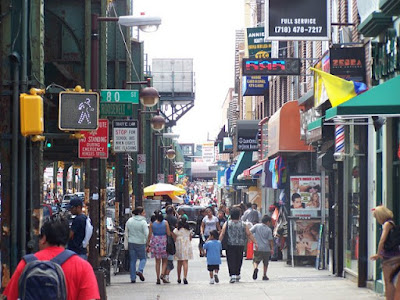 The Film Society of Lincoln Center has announced that as part of the 53rd New York Film Festival a new documentary by Frederick Wiseman's will focus on my neighborhood: Jackson Heights.  Here is the information as I received it today in a press release.

"In Jackson Heights"
Frederick Wiseman, USA, 2015, DCP, 190m
Fred Wiseman’s 40th feature documentary is about Jackson Heights, Queens, one of New York City’s liveliest and most culturally diverse neighborhoods, a thriving and endlessly changing crossroad of styles, cuisines, and languages, and now—like vast portions of our city—caught in the gears of economic “development.” Wiseman’s mastery is as total as it is transparent: his film moves without apparent effort from an LGBT support meeting to a musical street performance to a gathering of Holocaust survivors to a hilarious training class for aspiring taxi drivers to an ace eyebrow-removal specialist at work to the annual Gay Pride parade to a meeting of local businessmen in a beauty parlor to discuss the oncoming economic threat to open-air merchants selling their wares to a meeting of undocumented individuals facing deportation. Wiseman catches the textures of New York life in 2015, the music of our speech, and a vast, emotionally complex, dynamic tapestry is woven before our eyes. A Zipporah Films release.
Posted by Vincent Vargas at 4:06 PM