BlacKkKlansman is the latest from Spike Lee 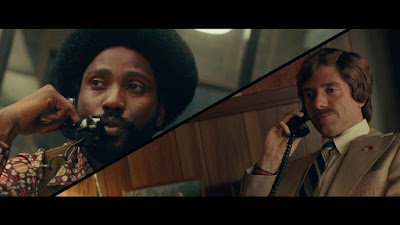 An incredible, almost unbelievable real cop story about the infiltration of a backwaters Ku Klux Klan chapter by a rookie black undercover police officer, using his white, Jewish partner as his double, serves as Spike Lee’s resounding career second act, his latest agitprop piece that rightfully puts him back on the charts for a new audience.

Spike Lee never really went away, but his recent output did not feel like the Fort Greene, 40 Acres and a Mule Spike of old. Sure, artists change and develop, but Spike seems to have emerged out of NYU already formed, already sure of himself, as he brought to the screen Afrocentric fare wrapped in socio-political discourse. BlacKkKlansman, his latest joint, is the real thing: Spike on top of his game, even with the excesses of old. Not a copy of his former art, but a textbook chapter on how to apply lessons from the past to a new public in order to empower them for a new fight. Make no mistake about it: this might be a story from the 1970’s, but this movie is all about Trump’s America, and the director makes no bones about it. Risking the very fact that the film could be dated years from now, this is the strongest indictment of the Trump administration to come out of Hollywood to date. The director has not lost his edge, in fact, his satiric vein might just be stronger than ever, and his anger over the current state of events boils over.

Heading a cast, ripe with Academy Award potential is John David Washington as Ron Stallworth, Colorado Spring's first African American cop, entering into a force replete with racial antagonism. Washington, with his "fro" looks like a figure straight out of the 1970's blaxploitation films that the movie quotes, as he builds a righteous persona for his character. Adam Driver, his doppelgänger in the sting operation, is Flip Zimmerman, a Jewish American detective who learns much about how he is perceived by others. The rest of the cast shines. Laura Harrier plays Patrice Dumas, an Angela Davis-type activist who Stallworth falls in love with. Topher Grace plays David Duke, the Klan's Grand Wizard, in a three-piece suit, as if he were running a business empire, and not the "invisible empire." Jasper Pääkkönen, as Felix, a dangerous member of the Klan chapter, is one of the scariest movie villains in quite a while. His performance is memorable and chilling. His wife, played by Ashlie Atkinson, is a monster who relishes the day when blacks will be eliminated by deadly force.

Spike Lee is a student of film, and a professor at NYU, his Alma Mater. BlacKkKlansman is filled with movie references both old and new, and on the shot seen above, he even copies himself. It's the "Spike Lee shot." No joint is complete without it. At a pivotal moment in the film, characters seem to glide forward towards an unknown destination. (The best use of this technique was in Malcolm X, as Denzel Washington -- John David's dad -- advances towards his tragic destiny at the Audubon Ballroom as we hear on the soundtrack Sam Cooke singing "A Change is Gonna Come." 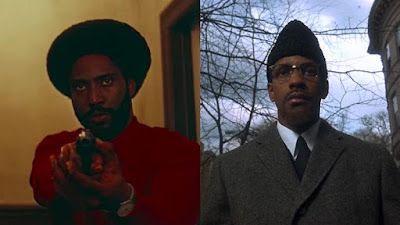 It's a moment where young Washington must have felt connected to his dad, and a brilliant way for Spike Lee to bridge the generations as the struggle continues.

Posted by Vincent Vargas at 6:17 PM