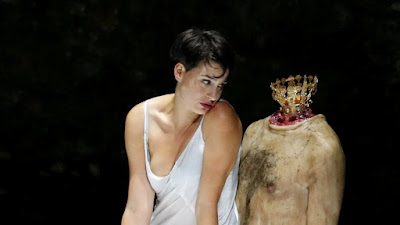 Romeo Castellucci is a director of deep, abstract ideas.  His stage productions are abstractions that constantly ask the audience to think. This was his approach to Richard Strauss's Salome, that amazing one-act work that after so many years still amazes the listener, and given the right staging, it is still capable to shock an opera audience out of its complacency.  This is the aim of this production, which premiered at the Salzburg Festival on July 28, and which continues playing until August 27th. Conducted with utmost precision by Franz Welser-Möst, and played by the amazing Vienna Philharmonic, the scores bristles with dark, thunderous excitement that reminds us that in 1905, the year of this work's premiere, Strauss was a young enfant-terrible looking to shock. Enter Castellucci with a production that visually attempts to top Strauss, and at times almost succeeds. 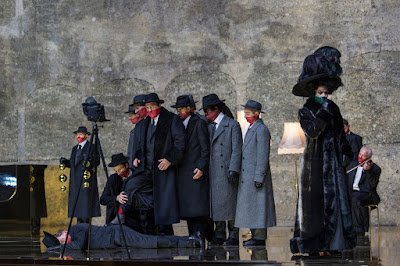 The opera has been staged in the auditorium of the Felsenreitschule, and the first thing we notice is that its famous arches have been covered. This evening will be all about hard cold stone: gray walls, gray men in 1930's fedoras and long coats, faces inexplicably half-painted red, and a John the Baptist, his face painted black, wearing a black fur coat that makes him look like a Biblical King Kong. Salome, meanwhile, dressed all in white, is his worshiping Ann Darrow. And constantly, naked bodies are being dragged across the endless stage giving us an atmosphere of horror, perfect for this work. 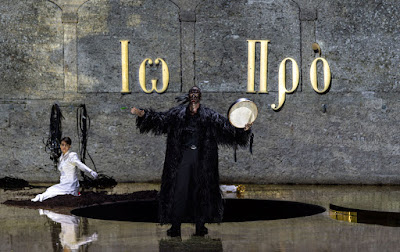 Forget about watching Asmik Gregorian do the "Dance of the Seven Veils." The Lithuanian soprano, who scores a triumph with this production, is crushed under a block of stone during that amazing music. And forget about seeing a facsimile of bass-baritone Gábor Bretz's head brought on a silver platter. When the time comes, the prophet's headless body instead is brought out for the Jewish princess to drool over. The only severed head we get is that of a horse. I'm sure Castellucci will argue that it is not a homage to The Godfather, and it is not. A girl's first infatuation in her life oftentimes is for a horse. This Freudian fetish beautifully mirrors Salome's fixation on Jochanaan.

Overall, an interesting and provocative production that will keep you on the edge of your seat musically, while intellectually entertaining your senses with images you will not be able to shake out of your system for a while.

Posted by Vincent Vargas at 2:13 PM