The Flying Dutchman as Light Operetta 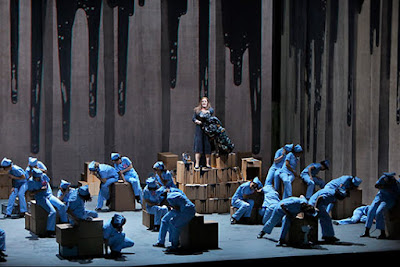 Certainly one of the wonders of Wagner's Der fliegende Holländer is how close it was to the music of Weber and Meyerbeer.  Although Wagner is already a fully formed composer at this time, he still holds on to the trappings of Romantic Opera, where set pieces were the norm of the day.  Thus, this work is filled with arias and ensembles that later on Wagner would drop in favor of a more unified musical creation.  The current production at the Bayreuth Festival, directed by Jan Philipp Gloger is an uncontroversial, and, at times, a light, and apathetic look at the age-old story of the mariner who blasphemed and thus has been cursed to wonder the seven seas in search of a pure maiden who can redeem him.

In this production, the director accentuates Daland's greed upon seeing the Dutchman's wealth, and turns the spinning wheels into a factory where portable fans are being packed and shipped by factory girls in sky blue uniforms. Of course, Senta is the only one not packing fans: she is too busy with her fetishistic sex doll of the Dutchman (a real ugly, misshapen object. Why would anyone fancy this?). No wonder when Daland brings the Dutchman to the factory and Senta finally meets the man of her dreams she is struck by his beauty and sex appeal.  It is a riveting moment in this staging.  I wish there had been more.

In an evening where the singing was first rate, the work of the chorus must be singled out. Eberhard Friedrich's ensemble is a well-oiled machine which can sing brightly and powerful, as in the chorus of men who move from the back of the deep stage to the apron pulling forward the set for the spinning wheel AKA fan scene. The chorus of women at the factory also did exemplary work, and boy, can they act.

The principals all sang their roles with gusto and good cheer, and the audience applauded them with even more gusto. Despite a very high temperature inside the Festspielhouse, there were many curtain calls, unlimited, as is the custom at the Green Hill. Among the principal players Tomislav Muzek showed off his powerful tenor voice as the forlorn Erik, and the steersman of Rainer Trost delighted the audience with this acting. John Lundgren's Dutchman is a dark, malevolent figure and Ricarda Merbeth's Senta is a powerful, wild driven woman. The two were made for each other! Axel Kober's conducting was firm, and he led a vigorous reading of this early score.

After six years, it is time for this production to be retired, and in its place we need a darker version of this story. After all, it's what Wagner's music calls for.
Posted by Vincent Vargas at 1:41 AM