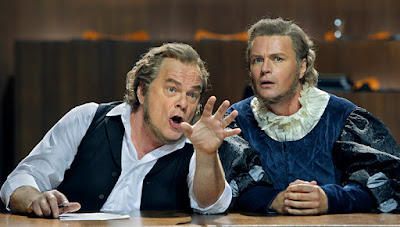 One of the highlights of last year’s trip to Bayreuth was attending Barrie Kosky’s new production of Die Meistersinger von Nürnberg.  The Australian gay director, who also happens to be Jewish, chose to highlight the anti-Semitism found in Richard Wagner’s work as it is found in the character of Sixtus Beckmesser, superbly sung and acted by Johannes Martin Kränzle, who is back this summer reprising this role.  As a matter of fact, most of the principals from last year are back, which makes this Meistersinger 2.0 a pleasure to witness, since Mr. Kosky has not just sat on last year’s laurels, but he has gone back to the drawing board and improved upon last year’s wonderful staging.

What is different this year? Act II lost the grassy surface that at the end of the act was rolled up anyway. Objects and furniture from the first act, which takes place in Wahnfried, Wagner's home in Bayreuth, were suddenly thrown together on stage left. The end of the act still features the controversial Jewish head ballon that shocked many viewers last year.  The only difference being that I do not remember booing during the opening night telecast, or the performance I attended.  This year, the conclusion of Act II featured vociferous booing from segments of the audience, although applause and cheers far outweighed those that were booing this production. Why the boos? Something tells me that there were some in the audience that like their Wagner cut and dry, conservative and without  any directorial intervension.  Or perhaps it might have been that segments of the audience that are still troubled by  Anti-Semitic references, and the role Wagner's music played in the development of National Socialism: the last time that Germany officially tried to destroy its Jewish population.

You couldn't ask for a better cast: the aforementioned Kränzle has settled into his role, and gives a masterful performance that last year could have been described as "shtick" but this year has matured into a character of Shakespearean dimension.  Michael Volle is right now the finest singling and acting Hans Sachs, and the same can be said about Klaus Florian Vogt's Walter. Together with newcomer to the cast Emily Magee as Eva, the principals are surrounded by a great cast of meistersingers, each of whom has a distinctive personality.

Philippe Jordan conducted with a sure hand, and achieved the kind of unique sound that manages to escape from the sunken pit and envelop the audience. Not every conductor manages to do it, but Maestro Jordan was quite successful in making us closer to Wagner's great music.

As long as this cast stays together, this will be a production for the ages.  Now, it is time to film it, and share it with the rest of the world.
Posted by Vincent Vargas at 1:07 AM