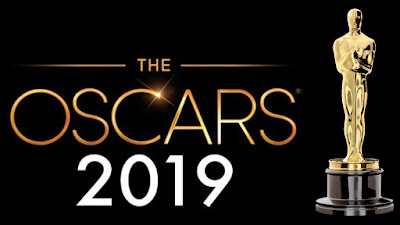 It's that time of the year! After a loopy, confusing pre-Oscar season complete with the postponement of an Oscar category which made little sense, and an announcement that certain categories would not be televised (another mistake that was rapidly rectified), we are limping towards the big day this Sunday, still with no host. In recent memory this is the first time that the ceremony will not be hosted by one person.

Still, Oscar night is Oscar night, no matter who hosts, and the awarding of this fabled statuette still matters in Tinsel Town. So, here are my predictions in the main categories.

BEST PICTURE: Whatever you might think of this art film, hands down, Roma will take the big prize, and it just might be a Mexican fiesta, with Alfonso Cuarón's film taking multiple prizes.

BEST ACTOR: After winning just about every award prior to Oscar night, including the Golden Globes and the SAG, 37 year old Rami Malek will become one of the youngest Oscar recipients for his impersonation of Freddie Mercury in Bohemian Rhapsody.

BEST ACTRESS: This is a tough one. Will Oscar award Olivia Colman for her beautiful performance in The Favourite, or will they give it to Glenn Close for a lifetime of great achievement? Oscar has a track record of doing this again and again? I think this just might be Ms. Close's year!

BEST SUPPORTING ACTOR: Another tough category! Mahershala Ali already won this category for Moonlight, but his performance in Green Book was praised by critics and audiences alike.  It's also a feel good movie, and the character he plays is very likeable; so I predict Mr. Ali will follow Denzel Washington to become the second African American actor to win two Oscars.

BEST SUPPORTING ACTRESS: The ladies from The Favourite (Rachel Weisz and Emma Stone) despite their fine performances, will cancel each other out. Marina de Tavira's role in Roma was small. This category is between Regina King (If Beale Street Could Talk) and Amy Adams (Vice). Being a huge Adams fan, I'm going with her this year.

BEST DIRECTOR: Here's what we have: Yorgos Lanthimos, an arthouse Greek filmmaker whose third English language film The Favourite is probably his most accessible work. Paweł Pawlikowski, who already won an Oscar for his masterful Ida, and whose Cold War is an artistic followup to that film, is a strong contender. Adam McKay, whose Vice was popular and well distributed is a long shot; and Spike Lee and his hip socio-political "joint" BlacKkKlansman has brought the Brooklyn filmmaker back to the forefront. Oh, Oscar, you make it difficult!  Oh yeah! I forgot! The winner will be Alfonso Cuarón!

And here are the rest of my predictions:

BEST CINEMATOGRAPHY: I'm hoping that the Oscar goes to the most beautifully shot film this year: the black-and-white, Academy Ratio Cold War.  However, Roma, another black-and-white beauty, might just take this prize as well.

ANIMATED FEATURE: No contest!  It's going to be Spider-Man into the Spider-Verse.

BEST DOCUMENTARY: In this political climate RBG is sure to win.

BEST FOREIGN LANGUAGE FILM: Could it be that Roma will get both Best Film as well as this award?  It's possible, but I will be happy if either Japan's Shoplifters or Poland's Cold War take the prize.

BEST SCREENPLAY: What a category this year! All great scripts, although Roma will defeat them all. However, it could happen that either The Favourite or Green Book can spoil the Roma juggernaut.

BEST ADAPTED SCREENPLAY: Here is where one of our great auteurs, Spike Lee finally gets his well-deserved Oscar for a lifetime of making movies his way.

The Oscar ceremony will be broadcast on ABC, Sunday February 24 at 8:00pm ET.
Posted by Vincent Vargas at 2:57 PM