Verdi's FALSTAFF at the MET 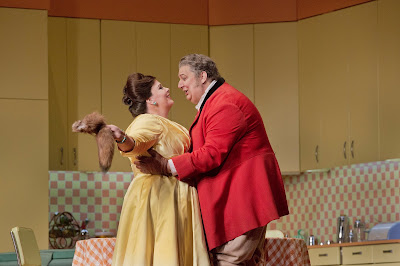 The creative work of an older artist is usually a very personal statement; the creative work of an older genius carries us to a place we have not been before, and that includes transporting the artist himself. And so it is with Giuseppe Verdi, who after a life in the theater, and a self-imposed retirement, came back to the limelight to re-examine the work of another genius: William Shakespeare, a playwright whose work preoccupied the composer from the early Macbeth (Verdi did not read the play until he composed the opera, basing his music on the libretto of Francesco Maria Piave) to Otello and the final Falstaff, both of them blessed with libretti by Arrigo Boito.

Last night the MET revived the Robert Carsen production of Verdi's last opera. The production updates the work to the post World War II era, or as the program indicates "during the reign of Elizabeth II," a decision that works most of the time. Utilizing a unit set, the Garter Inn morphs into the kind of stuffy 1950s gentleman's club where no women are allowed, so needless to say the appearance of Mistress Quickly (Marie-Nicole Lemieux) sends the club members running out the door. When Ford (Juan Jesús Rodríguez) disguises himself as Mr. "Fontana" he comes in looking like a Texas oil baron, and Alice's kitchen, where a mini-riot hurls Falstaff out the window and into the Thames River, looks like a technicolor colorization of I Love Lucy. On the other hand, Herne's Oak was minimalist with only a starry sky to denote the outdoors.

But what would this production be without Ambrogio Maestri? The man owns the role of Falstaff hands down, and he has sung it around the world, along with so many other roles, including Baron Scarpia in Tosca at Las Palmas, Michele in Il Tabarro at the Bavarian State Opera, and Germont in La Traviata in Tokyo. Earlier this season at the MET he was heartbreaking as Michonnet in Adriana Lecouvreur. He is one of our most gifted character singers, and his resonant, ample baritone fills the house.  It's very exciting to watch a singer so invested in a role.

The MET has surrounded him with a variety of talented singing actors for this revival, stand-outs include Golda Schultz, a sweet Nannetta, and the aforementioned Mr. Rodríguez who was excellent as Ford. Ms. Lemieux's deep contralto made an excellent Quickly, but her acting was a bit schticky and over the top, "more matter with less art," as the Bard himself would say.  The orchestra under the baton of debuting conductor Richard Farnes was its usual excellent ensemble.  All in all, it's a revival not to be missed, and if this opera is a new venture for you, this ensemble will surely make it memorable.
Posted by Vincent Vargas at 10:01 AM