NETWORK on Broadway with Bryan Cranston 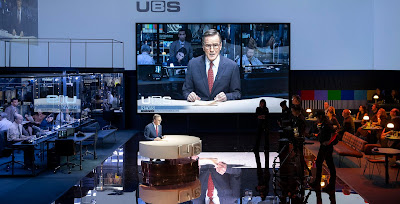 Network, the new adaptation of the Paddy Chayefsky screenplay, now playing at the Belasco Theatre, is all about watching. The arriving audience is greeted with a peek at a thespian's workout before a show. Actors on yoga mats stretching, exercising, and doing all an actor does to get into character now on display onstage. Director Ivo van Hove satisfies our inherent curiosities about show business while instantly making us voyeurs even before the first line of the play is uttered. And when the play does start, a giant screen upstage begins to capture it all in an HD hyper-reality. The TV images making the live performances before us almost secondary.

It’s satisfying to watch Bryan Cranston give what might just be the performance of a lifetime as Howard Beale, the veteran news anchor at the end of his rope, thinking of ending it all live on the air. A performance that has been finely crafted after a sold out run at London's National Theatre, and honored with the Olivier award. For me, the real satisfaction in Mr. Cranston's performance involves watching his 1080p image on a giant screen. And why not: it's how many of us got to know this talented actor, especially in his monumental performance in AMC's Breaking Bad, where he played Walter White, a chemistry teacher turned drug dealer. Van Hove’s staging celebrates our pixelized actor/audience relationship with him through the use of his brilliant technology.

Despite the 21st century staging, Lee Hal's adaptation of the film is set in 1976, where the fictional UBS is a distant fourth network, years before CNN made viewers dependent on 24 hour broadcasts and constant announcements of breaking news. Howard Beale’s rants maintain an air of prophecy reminding us that television is a show-business marketplace. And even though the character's monologues closely describe the current state of the medium, Chayefsky's main goal at the time was not to play the soothsayer, but to skewer the medium, and remind us why we called it the Boob Tube.

The supporting roles are a little bit more problematic in this production. It's very hard to forget or even come close to William Holden's Max Schumacher, being one of the actor's great performances of his later years. Tony Goldwyn is not the right age for the part, and although he gives a creditable performance, it is hard to believe him as a contemporary of the much older Mr. Cranston, especially when the two characters talk about how they both started together as young men at CBS with Edward R. Murrow. Maybe a little more old age makeup might have helped, or maybe van Hove is asking us to suspend our disbelief big time. Tatiana Maslany is believable as Diana Christensen, but again this actress is up against the indelible, celluloid memory of Faye Dunaway's Oscar winning performance.

Not to worry: with Mr. Cranston you will not be missing Jon Finch's titanic Academy award winning performance as Howard Beale. That's why the winner of this year's Tony award for best actor in a play is onstage at the Belasco Theatre.  Don't miss him!
Posted by Vincent Vargas at 7:45 PM