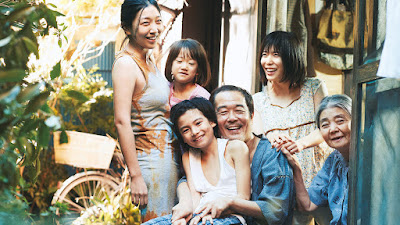 Shoplifters is Japan's entry at this year's Academy Awards. The film by Hirokasu Kore-eda, a "Lower Depths" look at a marginalized family in modern Japan, was the Palme D'Or winner at the last Cannes Film Festival, as well as one of the films in the Main Slate of the 2018 New York Film Festival. Director Kore-eda presents us with a most unusual group: a ragged collection of societal cast-offs, living together in cramped quarters like any other family.  But this "family" is unusual. They are bound together by their will to survive, and they exercise this primordial instinct by the oldest professions. The oldest male, acting in the role of the father, Osamu, (Lily Franky) and the youngest male, Shota, (Kairi Jyo) are a tremendous tag-team when it comes to ripping off supermarkets; and the teenage daughter Aki (Mayu Matsuoka) works at a sex club, entertaining anonymous clients from behind a one-way glass. When Osamu and Shota bring home a five year old girl named Juri (Miyu Sasaki), who has been forgotten by her parents, the family grows even more in their cramped quarter, but the girl is welcomed. Right away we realize that she is also damaged goods, like the rest of them: Grandma (Kilin Kiki) also notices that the girl's body is filled with scars. When the media breaks the news that the little girl has been kidnapped, Osamu's partner, Nobuyo (Sakura Ando) does not fret, instead she cuts Juri's hair, and the women go "shopping" for little dresses, which they all stuff into their bags. 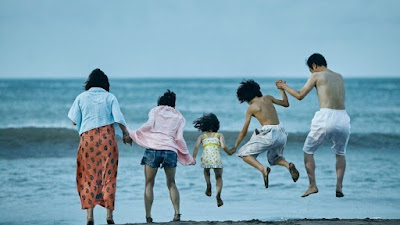 In telling their story, director Kore-eda avoids the darkest aspects of their lives. It might be a sordid story of poverty, but somehow the mood remains light throughout the film. As the director unwraps their story we come to know and love these characters, empathizing with their flaws, and even believing that they are more sinned against than sinning. As much as possible, the narrative line escapes from their cramped shanty, contrasting exteriors that show modern Japan's ultra-fast trains rolling by very close to their makeshift home. The family even has a day at the beach: one last moment of relative happiness before an event shifts the narrative into a darker hue that leads us to a denouement that's revelatory and surprising.

Shoplifters is a very special film in a year filled with incredible titles from all over the world. As New York Times critic Manohla Dargis concluded in her insightful review of this film "In their grubby imperfections, Kore-eda finds a perfect story about being human." And this is what elevates this tale into a universal examination of the human heart. Don't miss it. It truly is one of the best films of the year.
Posted by Vincent Vargas at 3:42 PM