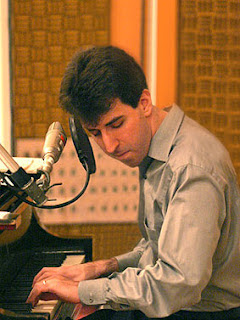 Last night I was very fortunate to be a part of the American Songbook series at the Allen Room inside the AOL-Time Warner Building. As a member of the Juilliard Choral Union, directed by Judith Clurman, we sang back-up to Jason Robert Brown. If you've never heard of Jason, you should know that he is the Tony award winning composer and lyricist of the musical Parade, and one of the handful of young post-Sondheim composers who are instilling new life to what has often been called a moribund art form. Playing with Gary Sieger on guitars and Randy Landau on bass (Jason provided his own percussion via his busy stomping left foot), the evening also included two amazingly talented singers: Laura Benanti and Rozz Morehead.

The men and women of the chorus sang the stirring "The Old Red Hills of Home" from the musical Parade, the touching anthem "Music of Heaven," and "Hear My Song" from his show Songs for a New World. Regretfully, at the very last minute, Jason decided to cut one number: his poignant "Coming Together," a song which he wrote six days after the events of September 11.

The men of the chorus were fortunate to be featured in a really cute number called "Being a Geek," in which we paraded up to the stage in über-geeky fashion and served as a kind of Geek (or is that Greek?) chorus to Jason's autobiographical 1950's-style confession of what it's like to be uncool. The sold-out audience at the Allen Room ate it all up, and the number got one of the biggest hands of the evening.

It was a great way to spend a Friday evening, and if you were at the concert, let me know what you thought of it.
Posted by Vincent Vargas at 3:16 PM