New Production of Tannhäuser in Frankfurt 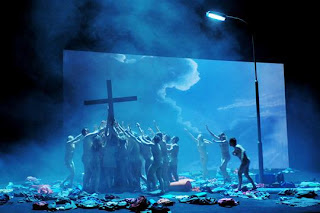 It is good to be able to report some Wagner news. A new production of Tannhäuser is playing in Frankfurt. Here is a review from Bloomberg News:

Tannhäuser is an aging rocker forced to choose either social respectability or degenerate exile with the bewitching and vampish Venus in Vera Nemirova's Frankfurt production of Wagner's 1845 opera.

It's the 34-year-old Sofia-born director's way of dramatizing Wagner's conflict between profane and sacred love, which has lost relevance in an age when sex is used to sell everything from tires to insurance. More typically, Tannhäuser is a medieval troubadour whose fling with Venus brings exile and misery, but also forgiveness from the saintly burg-dwelling Elizabeth.

Nemirova starts the show during the overture, bringing up the curtain on a group of young pilgrims strewing mats and backpacks on a near-empty stage. Clad in unstylish camping gear, they clamor around a large wooden crucifix, arms outstretched in ecstasy.

They then toss aside their clothes to bathe, before morphing, trance-like, into a group of writhing, heaving bodies. Remorse and more crucifix-worshipping follow.

Enter Venus (Elena Zhidkova), with a bottle of red wine and her boyfriend Tannhäuser (Ian Storey). Zhidkova looks great, with a mane of honey-blonde hair that she tosses and preens to show- stopping effect. She is beautiful and yet verges on the sluttish in her frilled spotted skirt, red fishnet stockings and cowboy boots. No aging rocker would resist.

When Tannhäuser finally escapes from Venus to find his way back to the Wartburg, the first people he meets are his former singing friends. In Nemirova's version, the Minnesänger are a bunch of middle-aged crooners of the type often invited to sing at weddings. Johannes Leiacker's inspired costumes include purple frilled shirts under black suits for the singers.

Nemirova's satirical Act Two transforms the singing contest into a modern-day provincial German fest, complete with live coverage by regional television, ribbon-cutting by a local politician, hostesses in black top hats and an advertisement for the beer company sponsoring the event beamed onto a screen at the back of a stage. It's perfect and drew a chuckle from the opening- night audience.

The third act is sparser and focuses on the emotions of the players. The singing at the premiere was wonderful, with Danielle Halbwachs giving a memorable performance as the unfortunate Elisabeth. Her voice is rich and expressive. Zhidkova skulks broodingly in the background, the light creating a halo of smoke from her cigarette, while Tannhäuser wrestles with his conscience.

Posted by Vincent Vargas at 2:38 PM