A New Ring for the MET is announced 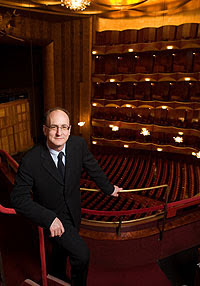 The following exciting news was reported on Playbill arts:

The Times reported that, during the panel discussion, Gelb revealed that soprano Deborah Voigt will sing her first (and eagerly anticipated) complete Brünnhildes, tenor Ben Heppner will sing Siegfried and bass-baritone Bryn Terfel will sing Wotan. (The Associated Press subsequently reported that tenor Jonas Kaufmann would take the role of Siegmund in Die Walküre.) Canadian theater director Robert Lepage will direct the new staging of Wagner's four-part epic, which begins in the 2010-11 season. A full cycle will be performed in the 2011-12 season (the third that Gelb will have overseen in its entirety). Company music director James Levine is scheduled to conduct.

The Met will present its current Ring production, by Otto Schenk and Gunther Schneider-Siemssen, once more, during the 2008-09 season, before retiring it.