Of Oscars, Mexican Directors, and the Bible 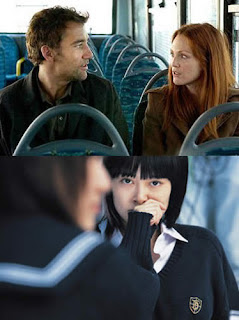 With the Oscars ceremony a mere twelve days away, and the nomination of Children of Men, Pan's Labyrinth, and Babel for major awards, the American public is realizing that the world of cinema is experiencing a Mexican Renaissance. The directors of these three movies were all born in the country that in the 1940's and '50's gave us Emilio Fernández, María Félix, Gabriel Figueroa; and, of course, the country which harbored Luis Buñuel after the Spanish Civil War, and allowed him the artistic freedom to grow as an artist.

The present "Nueva Ola" started when the New York Film Festival premiered Guillermo del Toro's Cronos in 1993, and it continued in 2000 when the French and American public discovered Alejandro González Iñárritu's Amores Perros at Cannes and, later in the same year, again in New York City. Alfonso Cuarón's Y Tu Mamá También soon followed a year later. Since the press and the public likes these things in threes, the stage was set. These three film directors are the new "Los Tres Grandes," to borrow the phrase that was often used to describe the three great muralists of Mexico's Revolution (Diego Rivera, José Clemente Orozco and David Alfaro Siqueiros).

And now, since religion and Latin America cannot really be separated, allow me to present to you a really interesting coincidence. The following excerpt is from the eleventh chapter of the book of Genesis in the Old Testament.

"And the whole earth was of one language, and of one speech. And it came to pass, as they journeyed from the east, that they found a plain in the land of Shinar; and they dwelt there. And they said one to another, Go to, let us make brick, and burn them throughly. And they had brick for stone, and slime had they for morter. And they said, Go to, let us build us a city and a tower, whose top may reach unto heaven; and let us make us a name, lest we be scattered abroad upon the face of the whole earth. And the LORD came down to see the city and the tower, which the Children of Men builded. And the LORD said, Behold, the people is one, and they have all one language; and this they begin to do: and now nothing will be restrained from them, which they have imagined to do. Go to, let us go down, and there confound their language, that they may not understand one another's speech. So the LORD scattered them abroad from thence upon the face of all the earth: and they left off to build the city. Therefore is the name of it called Babel; because the LORD did there confound the language of all the earth: and from thence did the LORD scatter them abroad upon the face of all the earth."

The last time that two titles of movies were taken from the same portion of the Bible it was in the 1960's when Ingmar Bergman consciously decided to use a verse from the book of Corinthians as inspiration for two of his masterpieces: "For now we see Through a Glass, Darkly; but then Face to Face."

I hope that you get to enjoy these new masterpieces from the New Wave of Mexican Cinema.
Posted by Vincent Vargas at 7:02 PM