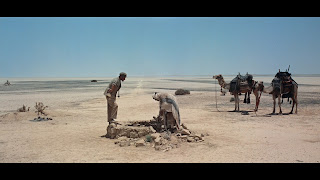 I'm watching the UK release of the latest restoration of David Lean's Lawrence of Arabia on Blu-Ray, and I have to report that I'm seeing the same surprising results as I saw last week at the New York Film Festival presentation. This restoration presents a reduced color spectrum, much more limited than the one I remember from the 1988 restoration and DVD release. This has to be the palest, most anemic restoration of Lawrence yet. The scene above, for example, struck me as needlessly monochromatic.  Although the film looks stunningly sharp and incredibly clean, the colors are very muted, and several of the night and dusk scenes look so dark that the viewer is unable to discern any facial features. I don't believe that this is what Lean and his cinematographer Freddie Young intended when the film premiered back in 1962.

The previous restoration was done with the participation and assistance of David Lean. Now that he is gone, something tells me that he would not be pleased with the results achieved here.   It's almost as if the colorist had decided that the film needs a more contemporary look.  Lawrence is anything but a contemporary film: it is a gigantic production the likes of which, proverbially, they don't make anymore, and it belongs to a group of epic films (Ben-Hur, El Cid, The Vikings) whose color spectrum was designed to dazzle and impress audiences.

I certainly hope that in a future release the color is corrected, taking the lead from the results achieved back in 1988.  Lawrence of Arabia is a great film, and it deserves better treatment.

Posted by Vincent Vargas at 6:09 PM