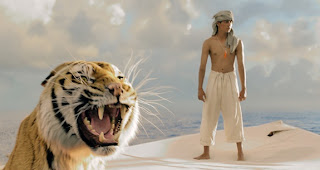 The 50th New York Film Festival began with Ang Lee's new film Life of Pi, based on the bestselling novel by Yann Martel.  The film, shot in 3D begins by showing scenes from a zoo that's owned by the main character's father. This title sequence has a childhood charm as the animals mug for the 3D camera.  Selected letters from the various names of the movie's titles swing freely, as if hanging off an invisible branch of an unseen tree.  Even before the film proper begins a sense of fantasy and make believe has been injected into the narrative, a subtle foreshadowing of the incredible story that the director has prepared for us.

Life of Pi, essentially a film about the art of storytelling, reveals its narrative like concentric circles.  The older Pi Patel, played by Irrfan Khan reveals to a writer, played by Rafe Spall, the chapters of his unusual life.  We learn that as a young Indian boy Pi's inquisitive mind and restless imagination lead him, as he grew up, to adopt Christianity and Islam together with the Hindu tradition into which he was born.  The ever inquisitive, Pi, whose name is short for piscine (he was named for a pool in Paris) also wants to manually feed the zoo's most dangerous animal: a Bengal tiger curiously named Richard Parker.

When Pi's father decides to close the zoo, sell the animals and move to Canada, the family packs their belongings and all their animals, and board a Japanese freighter.  During a tremendous storm the ship sinks, and the only survivors on a small lifeboat are Pi, a zebra, a hyena, an orangutan, and the Bengal tiger.  In the aftermath of the furious storm a bloody Darwinian struggle of the species occurs in the lifeboat leaving alive only the tiger and Pi to fight for mastery of the small vessel.  Soon enough Pi realizes that in order to avoid being eaten by the ferocious cat, he must learn to feed Richard Parker as well as himself.  As the story progresses, Pi also realizes that he must maintain the tiger alive if only to fend off the horror of the interminable loneliness of being stranded in the middle of the sea.  The two characters enter into a codependent relationship as their strengths begin to fail after two hundred days adrift. Eventually Pi is rescued on the coasts of Mexico, but the tiger is nowhere to be found.  When two officials of the Japanese Maritime Department question Pi as to why the ship sank they fail to believe Pi's story of his survival with the animals.  When pushed further, Pi offers a totally different account of the shipwreck and his rescue -- a realistic and brutal tale devoid of any of the magical-realist events that we have seen.

Late in the structure of the film, the narrative suddenly veers into this unexpected Rashomon territory.  Is the story we have seen a fantasy?  Is the new story that Pi tells the Japanese officials the real way that the events occurred?  How accurately can the older Pi remember events that happened so long ago?  Is he lying?  Is he telling the truth?  What is truth?

Even though this is the most interesting aspect of the entire narrative, it seems that Ang Lee wants to avoid the whole Rashomon comparison.  He does not dramatize the alternate story, deciding to stage it as a monologue for Suraj Sharma, the fine actor who plays the teenage Pi.  What takes one third of the novel to be revealed is compressed into mere minutes that are clumsily tagged on to the end of the film.  The result is that we are made to believe the magical story that we have seen, and like the two Japanese officials we reject the more realistic account of the events.  The magic of truth at 24 frames-per-second wins again.

At the film's premiere last weekend director Ang Lee revealed that he is still tweaking the film, which currently runs 120 minutes.  It would be interesting to compare the film when it opens in November of this year to this work in progress that the New York Film Festival presented as its opening night selection.
Posted by Vincent Vargas at 11:37 AM