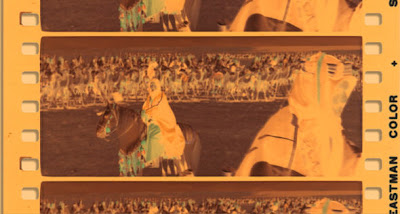 Last year the New York Film Festival presented a stunning restoration of 1959's Ben Hur.  Watching it on the screen for the second time in my life, it made me remember how impressed I was when I first saw it as an 11 year old on a re-release in the early 70s.  This year, the Festival presented the new 4K restoration of Lawrence of Arabia, and I'm afraid to report that I was not impressed.  Throughout the four hour run of the film scenes appeared to be dark, and the color somehow was not as I remembered it.  Of course, I'm basing myself on the 1988 restoration of the film which was a restoration hallmark, and to my eye visually faultless.  Robert A. Harris, who was responsible for that restoration, introduced this showing praising Grover Crisp, Sony's executive vice president of film restoration for not taking any short cuts on this project.

Harris said that the restoration presented in 1988 used a process called "wet-gate printing," which hides about 90 percent of the imperfections in the film. Harris went on to say that "When Grover started scanning this at 8K [resolution], he opened a Pandora's box and he's been dealing with that for over two years now. The film is scratched, it has nicks, it has tears. There is actually heat damage from the desert. He was able to bring in a software company to create a methodology to help with that."

After so much work on this digital restoration, the NY Film Festival showing might have just suffered from a projection problem.  I remember well the 50th anniversary showing of Gone with the Wind at Radio City Music Hall.  The entire film looked dark.  Therefore, the new Blue-Ray release of the film on November 13 will hopefully reveal the real results of the work that has been done on this classic film.

Below is a trailer that was made for this new restoration of Lawrence of Arabia.