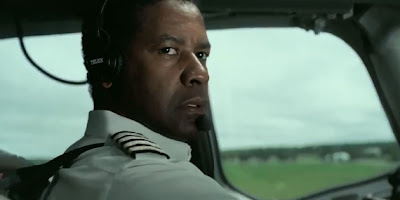 In Robert Zemeckis's excellent new film Flight, Denzel Washington portrays Captain Whip Whitaker, an airline pilot whose experienced skills at the helm of an airliner are only second to his ability to party hard the night before, and then sit in the pilot's seat, high as a kite on liquor and cocaine, and get himself ready to roll.  On a routine flight from Orlando to Atlanta, he steers his plane through a hellish storm and into clear skies in a way that only a zonked-out buckaroo could.  Near their destination, the aircraft inexplicably malfunctions and enters into an out of control tailspin. In a feat of unprecedented skill, and in one of the film's inspired images, Captain Whitaker succeeds in turning the jet upside down, thus averting a crash, and lands the plane in a patch of country field, thus saving himself and all but six of the souls on board. Although the media hails him as a hero, the NTSB has questions about the crash, and as an investigation begins Captain Whitaker's alcoholism and drug dependency surfaces as he confronts his private demons.  The title of Zemeckis's film refers to the plane trip as well as the examination of how the crash sends Captain Whitaker into a personal journey -- a flight that ultimately makes him discover his true grace.

Along the way, Kelly Reilly as a down-on-her-luck substance abuser enters Whip's crowded orbit.  Already there are John Goodman as Whip's whimsical rock-androll dealer, Don Cheadle as his defense lawyer, and Bruce Greenwood as Whip's best friend and fellow pilot.

The screenplay by John Gatins is excellent when it comes to going places we least expect.  This was a script that took the writer twelve years to complete, and after such a long gestation process it is surprising that it has turned out so good.

The entire film revolves around Denzel Washington's character, and the actor gives a truly superb performance, one that I suspect has been carefully crafted by Mr. Zemeckis with a Best Actor Oscar very much in mind. But awards aside, Mr. Washington is really impressive in this role, adding yet another memorable character to his long list of superb characterizations.
Posted by Vincent Vargas at 2:16 PM