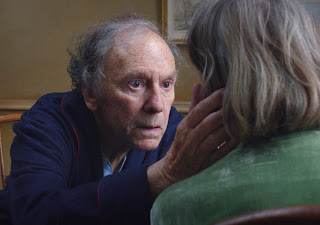 While Life of Pi takes pleasure in showing us the toll of the sea on a shipwrecked boy, Amour, the winner of the Palme d'Or at this year's Cannes Film Festival, allows us to explore the toll that life takes on us when we dare to love.  Michael Hanake's film is an austere and ascetic miniature, but the force of emotions displayed are nothing short than titanic.  This story of an elderly couple, whose wife suffers a stroke leaving the husband to take care of a partner who rapidly spirals into a miserable decline, is reminiscent of the work of Ingmar Bergman.  In fact, it is hard while watching the film not to think of the director's great Cries and Whispers, a film that also deals with death and despair inhabiting the great interior of a country mansion.  Amour haunts a big Parisian apartment, filled with books, bric-a-brac, and a warm lifetime of living.  The great Iranian cinematographer Darius Khondji lights this impressive set with a fading light that oftentimes seems to turn the apartment itself into a character.  The movie is shot with long takes, languidly taking their time, allowing the viewer to enter inside the couple's endgame.

In a stroke (absolutely no pun intended) of casting genius, playing the elderly couple Anne and Georges, two aging music teachers, are Jean-Louis Trintignant and Emmanuelle Riva, the stars of Hiroshima, Mon Amour, the 1959 breakthrough film by Alain Resnais.  Their performances in this new film are nothing short of stunning, and the chemistry that they had back in the days of the fledgling French New Wave is readily visible here.  It is heartbreaking to experience the decline of Anne as portrayed by Ms. Riva.  The way she twists her face, seemingly sucking the very life out of it, together with her cries of pain and unintelligent attempts at speech, embodies a performance of Academy Award caliber.  Likewise, Mr. Trintignant is very impressive as her patient husband.  During the course of the film Anne calls him a "monster," but Georges is almost never given to hysterics during his wife's long ordeal, although, just underneath the surface, anyone can see that he is ready to explode with unspeakable violence.

Michael Haneke has crafted a film that reminds us that the way of all flesh is at times unbearable and unjust.  In his previous film The White Ribbon (2009), he dared to show the genesis of evil -- the beginning of Nazi ideology as seen from the point of view of a small northern German village.  Now, the Austrian director, working in French, attempts to come to terms with life and its ultimate end, a landscape perhaps more complex, even more mysterious, and arguably richer than that of the birth of political ideologies.  The success of Amour lies in the fact that Mr. Haneke does not hold back.  As with his previous film it is a work that is often hard to look at, but never strikes a false note.
Posted by Vincent Vargas at 12:09 PM