Booing at the Royal Opera House 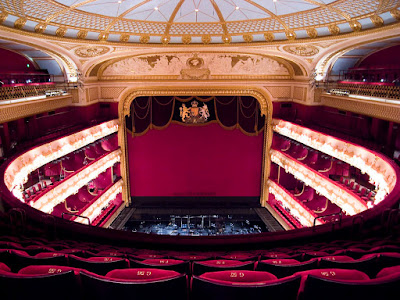 The opening night performance of the opera William Tell, by Giacomo Rossini was booed at the Royal Opera House, Covent Garden because of the on-stage dramatization of a rape scene with nudity. The following excerpts are from an article on the BBC website:

The Opera House issued a statement after the performance... apologizing for any distress caused. Director of opera Kasper Holten said: "The production intends to make it an uncomfortable scene, just as there are several upsetting and violent scenes in Rossini's score. We are sorry if some people have found this distressing."

Holten said the scene "puts the spotlight on the brutal reality of women being abused during war time, and sexual violence being a tragic fact of war." Rossini's opera of the Swiss patriot, William Tell, who shoots an arrow that splits an apple atop his son's head, has been directed by Damiano Michieletto and stars Canadian baritone Gerald Finley as Tell and American tenor John Osborn.

Osborn told Reuters after the performance that the scene "maybe ... went a little longer than it should have. But it happened and I think it's an element you can use to show just how horrible these people were that were occupying this town," he said. "If you don't feel the brutality, the suffering these people have had to face, if you want to hide it, it becomes soft, it becomes for children."

The Stage gave the production one star. George Hall called it a "dire evening" in which the "gratuitous gang-rape" scene provoked "the noisiest and most sustained booing I can ever recall during any performance at this address. Intellectually poverty-stricken, emotionally crass and with indifferent stagecraft, the result is nowhere near the standard an international company should be aiming at", he said.

Mark Valencia writing for What's on Stage pointed out that first night booing is "a fast-growing problem at Covent Garden that doesn't happen at other opera houses. It's become standard practice for the director of practically every new production to be jeered by practiced factions in the audience who object to ideas that go beyond the literal reading of an opera," he said.

But at last night's first night "the perpetrators did something unheard of: they booed during the music. And they did so loudly and long." They also booed at the end of the performance when the production team came on stage for the curtain call.
The opera is Italian director Damiano Michieletto's debut at the Royal Opera House.
Posted by Vincent Vargas at 11:18 AM