Jurassic World: More of the Same 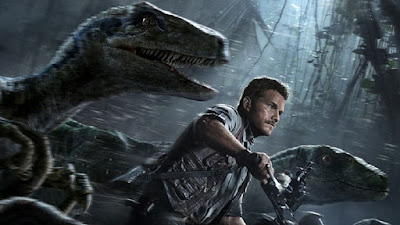 Mankind's twisted dream to play God is at the heart of the best horror movies in cinema history. It is the driving force behind not just Frankenstein but every other movie that features a mad scientist throwing a monkey wrench in the machinery of the natural universe, only to be punished for his folly, usually by his own creation. It is also the primal essence of Michael Crichton's novel Jurassic Park and the Steven Spielberg franchise adapted from that bestseller that features the original film, two sequels, and now a reboot: Jurassic World, also produced by Amblin Entertainment, Spielberg's company, and directed by Colin Trevorrow, a helmer who is not afraid to liberally pay homages to the earlier films and its famous creator.

If you remember Jeff Goldblum's line in The Lost World, the uneven sequel to the first film, then you're already pretty familiar with the main plot of this new film. Back in 1997, reprising the role of Dr. Ian Malcolm, the character quipped as he once again stared at the ferocious biological dinosaurs that DNA cloning had brought back to life, and the initial sense of wonder that it produced on people: "Oh, yeah, Oooh, Aaah, that's how it always starts. Then later there's running and um, screaming." In Jurassic World there is plenty to Oooh and Aaah. We are back in Isla Nublar, a remote island near Costa Rica, where the original Jurassic Park was built. Now an amazing resort, a la Disney World, has emerged from the ruins of that failed enterprise where the tourists can indulge in the fantasy of having a close encounter with a host of extinct creatures. There's even a petting zoo where the kiddies can ride the mild baby herbivores. But to satisfy the spectators blood lust there is also a show where the carcass of a dead shark is eaten whole by a gigantic Mosasaurus, an aquatic carnivore, who jumps out of his pool, like a killer whale, splashing those in the stands. The scene is one of the early highlights of the film, and it is a magnificent example of cgi at its best.

The plot is pretty basic. Two brothers are sent on a dream vacation to Jurassic World where their aunt (Bryce Dallas Howard) is the operations manager of the place. Even though she is supposed to personally give the kids the VIP tour of the park, she is too busy recruiting corporate sponsors for a new attraction called Indominus Rex, a genetically modified Frankenstein of a dinosaur made from the DNA of several dangerous predatory creatures. Meanwhile, Owen Grady (Chris Pratt), a Velociraptor trainer, and Great White Hunter type, warns the powers-that-be that Indominus Rex poses a real threat because it  has lived in isolation all its life. Further, Vic Hoskins (Vincent D'Onofrio) believes that the raptors can be trained for military use. This is the "Oooh and Aaah" section of the film.

But what would the Jurassic Park franchise be without the running and the screaming?!

And there's plenty of that as Indominus Rex, tired of his isolated existence, escapes from his walled enclosure in search of freedom and a viable second act to this film. Its escape is followed by four Velociraptors busting out, and most thrilling of all the spectacular flight of escapee winged Pterosaurs, who descend on the park's visitors, like a squadron of fighting planes, and attack them like the Avialae descendants of dinosaurs in Alfred Hitchcock's The Birds. There's running for ya! Also, there's the sight of Ms. Howard racing through the island's thicket in her business suit and 4 inch heels. Soon to become a camp classic! And speaking of classics, the film manages to channel the spirit of King Kong as well as the original Jurassic films.

In the Judeo-Christian tradition trying to be a creator is bad enough, and it has to be punished, but the producers of Jurassic World also know that we live in a secular society. Therefore, the bad guys in this film are not the scientists who originally cloned these creatures, but the shady men who represent the corporate greed that leads to the destruction of the enterprise. It's the one interesting take on the Frankenstein myth that the Jurassic franchise has added, and it is a formula that adds some interest to an otherwise predictable journey to a man-made segment of the Mesozoic Era.
Posted by Vincent Vargas at 11:54 AM