Shenanigans on the Green Hill 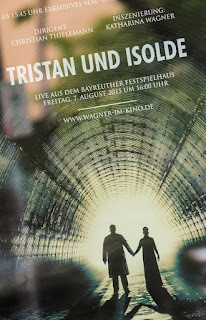 Lots of news to report.  First, a poster advertising Opening Night of the Bayreuth Festival (on the left) is now available. The festival will begin this Saturday with a performance of Tristan und Isolde, a new production by Katharina Wagner. The composer's great-granddaughter shocked audiences with her strange, irreverent production of Die Meistersinger. This new production of Tristan will be shown on German theaters on August 7.

There are also reports that the rehearsal period for this festival has not gone smoothly. Already two sopranos have bowed out of this new production, and now the latest news is that there is growing animosity between Kirill Petrenko and Christian Thielemann. The root of this animosity might stem from the fact that Mr. Petrenko has just been named chief conductor of the Berlin Philharmonic, a position that Mr. Thielemann coveted as a result of being a disciple of Herbert von Karajan who was appointed music director for life of this orchestra in 1955.

Currently Evelyn Herlitzius is singing the role of Isolde.  She replaced Anja Kampe a few weeks ago. However, the singer has not stormed out of Bayreuth and will honor her contract to sing the role of Sieglinde in this year's revival of Frank Castorf's dreadful Ring production. It is interesting to note that Ms. Kampe is Mr. Petrenko's companion, and Mr. Thielemann is conducting the new production of Tristan.  You do the math!

Further news about Katharina's Tristan reveals some early pictures of this new production. 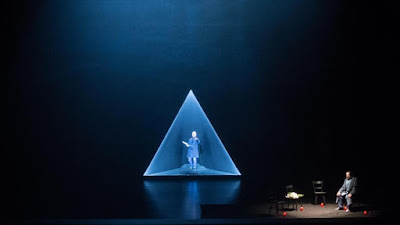 This beautiful stage image bears more than a passing resemblance to the "New Bayreuth" style of Wieland Wagner, Katharina's uncle, who revolutionized the festival when he took over the reins in 1951. In an effort to get rid of all vestiges of Nazism that the festival had acquired, thanks to the many times that Adolf Hitler attended during the 1930s, Wieland Wagner employed light and darkness to re-invent the Wagnerian world. It became a style much imitated around the world. 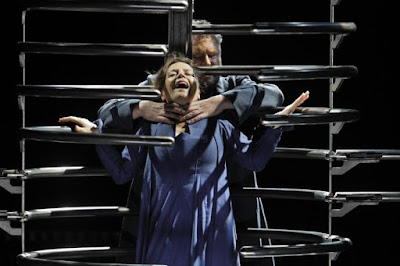 An interesting image from what can only be Act II of the opera.  Though the centerpiece of this work is the glorious love duet between the title characters, it seems that Katharina is underlining the impossibility and the danger of this elicit love affair by placing the two characters on opposite sides of a turnstile, while Tristan seems to be choking his beloved. 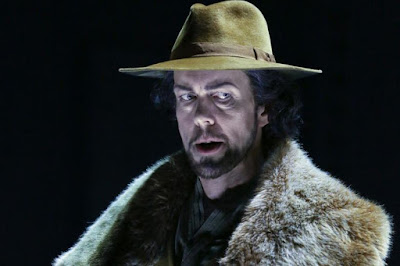 Georg Zeppenfeld as King Marke looks more like a pimp from a 1970s blaxploitation film.

As always, opening night of the Bayreuth Festival is an event, and this production will, I'm sure, divide audiences and further the debate over the kind of productions that are being presented at the Green Hill these days.
Posted by Vincent Vargas at 7:39 PM