Das Rheingold at the Festspielhaus 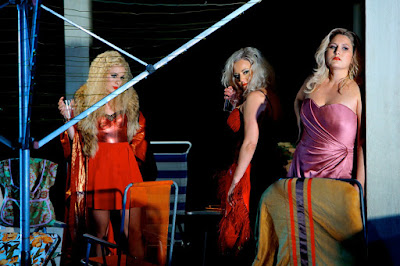 After three years of listening to the boos overpower the cheers, together with a list of controversial reviews and awful word of mouth, I got a chance this afternoon to begin the Frank Castorf experience with a performance of Das Rheingold.  This production was to have been directed by cinema's  Wim Wenders, but he pulled out, and Frank Castorf came to the so-called rescue.  Castorf, an East German director, is best known for his unusual stagings of classic works.  This Ring is a  production that premiered in 2013 to celebrate the bicentennial of the composer's birth.  No longer a story of dwarfs, gods and heroes, Castorf sets the mythic story in the heartland of America, Baku, and even Wall Street's Stock Exchange and Berlin's Alexanderplatz in order to tell a tale of today's gold: oil.

The first installment takes place in a run down motel on Route 66.  The gods have been turned into figures from American films, and to underscore this, the production is totally filmed and shown on a giant videotron.  Some scenes actually have to be seen on the screen since they happen in rooms in the motel that we cannot see from the audience.  It's all pretty silly, and totally non-essential.   Whenever Castorf runs out of ideas he goes back to Wagner.  For instance when Donner swings his hammer to blow away the clouds and reveal the rainbow bridge that will take the gods into Valhalla, all he manages to do in this production is short circuit the electrical power in the hotel.

As usual, the cast was very strong, starting with Iain Paterson as Wotan, and Nadine Weissmann as a memorable Erda.  Two singers from last night's Meistersinger were also in this cast: Daniel Behle as Froh, and the indestructible Günther Groisböck as the giant Fasolt. 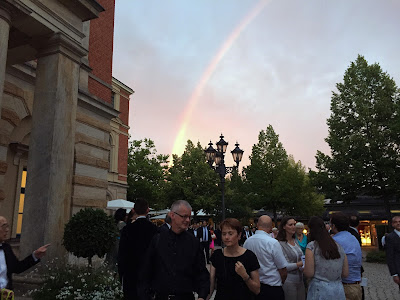 Getting back to Donner, played as a cowboy dressed in black by Markus Eiche, obviously after his hammer blow no rainbow bridge showed up.  There was a rainbow flag, but it looked out of place in a very "straight" production.  However, as we came out of the Festspielhaus after the performance we learned that it had rained on the Green Hill, and overhead there was a lovely rainbow: the rainbow we never got in this God-awful staging.
Posted by Vincent Vargas at 4:40 PM