Tristan und Isolde at the Festspielhaus 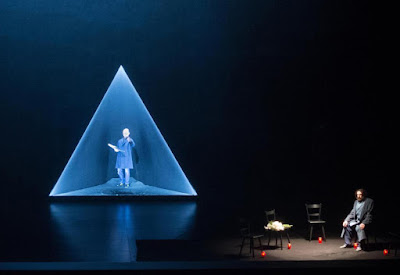 The new production of Tristan und Isolde by Katharina Wagner premiered last year to great acclaim.  It is a production that has been out in DVD/Blu-Ray for a while, and it has been familiar to many who follow the going-ons at the Green Hill.  This year Bayreuth is offering a rare treat with René Pape singing the role of King Marke.

The look of the production with its use of darkness and light harks back to 1951 and the reopening of the Festspielhaus with the now classic, austere, and controversial productions of Wieland Wagner. It is apt that this year, in particular, the role that Wieland played in Bayreuth is remembered.  This is the 100th anniversary of his birth, and here in Bayreuth he is being remembered through a special exhibit on the grounds of Wahnfried, and through a newly published picture book by Till Haberfeld and Oswald G. Bauer.

Last night's production ended up being a compromised evening. Petra Lang was ill and unable to sing the role of Isolde.  However, she stepped into the stage and "lip-synched" the words to Ricarda Merbeth who sang the role standing on the apron, stage left, in front of a music stand, and following the score.  Frankly, I was shocked to see that the Festival did not have somebody prepared to take on the role in case the principal is ill.  I'm aware that it is difficult to readily get Wagner singers, but Bayreuth is a theater, and no theater should be in business unless there is an understudy ready to take on the role.  The show must go on, Bayreuth!

The rest of the cast was solid. Stephen Gould was a stentorian Tristan who was able to sing the part successfully having a silent partner next to him, and hearing Isolde's vocal line yards away, and outside the main stage area.  Not easy!  Iain Paterson, who sang Wotan in Das Rheingold was an able Kurwenal, and Christa Mayer was a big-voiced Brangäne.  René Pape once again proved that these days he owns the role of King Marke. As always, he was heartbreaking in this role.

Despite all the problems, the performance ended up being truly memorable due to the amazing conducting of Christian Thielemann.  After so many years spending his summers here, he knows that orchestra, and knows how to get the best sound out of that fabled pit.  Not everybody has learned how to do it.    Marek Janowski's reading of the Ring, thus far, for instance, lacks power. Thielemann knows that the pit can swallow sound, and he knows how to rescue it and get it out to the house.  As a result what we had last night was an evening awash with wondrous sonority, but finely tuned, and always tasteful.  This was not just big sound for the sake of making an unforgettable expression.  It was, rather, the kind of sound that can only be achieved when a conductor knows the score intimately and the orchestra is able to respond to his choices.  Thus far, Mr. Thielemann has been the star of this festival, something that he has proven, over and over again, throughout his years at The Green Hill.
Posted by Vincent Vargas at 1:44 AM

We saw the performance a few days later (Wednesday, Aug 16).

I agree about the singing and the conduction.

But I have to say that I was annoyed, even infuriated, by the clumsiness of the directing, which had irrelevant "business" which seriously distracted our attention during the love duet:

- at the end of Act I -- T&I effortfully ripping cloths, not paying attention to one another

- then the Liebesnacht in Act II -- Kurwenal trying to escape (the first 10-15 minutes), then the building and decorating of their tent (another 15 min), ignoring one another

- and finally the Liebestod in Act III -- Isolde trying to sing pianissimo while propping up Tristan, then Brangäne, who couldn't stand still, and moved around nervously during the remainder of the Liebestod.