Meistersinger at the Festspielhaus 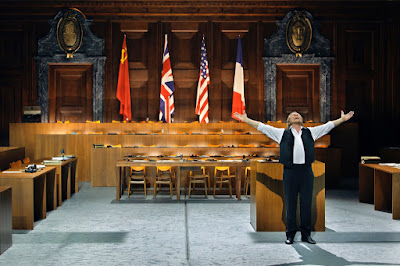 There was no denying that Barrie Kosky's new production of Die Meistersinger von Nürnberg was envisioned in part for the TV screen.  BR-Klassik broadcasted the opening night event to Germany, and the results were magnificent: a handsome, detail-filled production filled with excellent singing actors that know how to act for a theater the size of Bayreuth, but are also experienced enough to know that the camera captures every move and amplifies it.  Less is more, and Michael Volle, to a large extent proved exactly that throughout the broadcast.  His Hans Sachs was a study in subtlety, with very few instances of stand-and-bark delivery of old opera staging.

The performance was stellar, very much an exact copy of opening night.  Unfortunately Michael Volle was not in good voice, and before the beginning of Act III there was an announcement from the stage asking the audience for their indulgence since Volle wanted to continue singing. He actually did better than I expected.  He is an intelligent singer, and he knows how to pace himself and sing over whatever ailment he was suffering from.

I thought that Klaus Florian Vogt was having vocal problems as well, and this showed up in the Act III Prize song.  He got through it, but his high notes suffered as his throat seemed to be tightening above the staff.  This is a problem that I have observed with this fine singer lately.  It's unfortunate because, as I mentioned in my last blog entry, his voice has an eternally youthful quality.

Anne Schawenwilms improved on her Eva from opening night, and Günther Groissböck as Veit Pogner, and Johannes Martin Kränzle as Sixtus Beckmesser offered some of the strongest singing of the evening.

On to The Ring of the Nibelung tomorrow.
Posted by Vincent Vargas at 6:30 PM