Götterdämmerung at the Festspielhaus 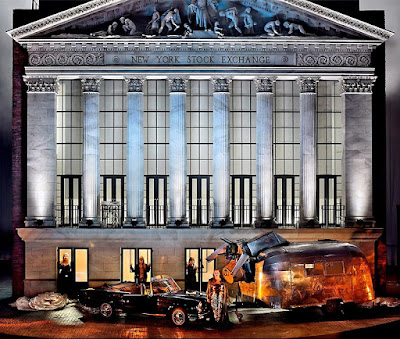 During the immolation scene that ends Wagner's great epic The Ring of the Nibelung, the dead body of Siegfried lies burning on a pyre, his wife Brünnhilde rides her horse Grane into the fire as the banks of the Rhine overflow, and the gold that was stolen in Das Rheingold goes back to the Rhinemaidens.  It's the end of the world, but a hopeful elemental end written to some of the most ravishing music in the lyric theater.  Of course, what I just described are the stage directions that Wagner wrote on his score.  No director has followed them for years as more and more theaters experiment with this work.

Frank Castorf's Ring at the Bayreuth Festspielhaus is by far the most experimental of any Ring that I have seen.  At times, it goes beyond just changing the locale of the original setting, it often creates its own running story which pales in comparison to the epic tale that the composer imagined. Often, Castorf's ideas do not work, or are, rather, so strange and alien to the words and music that he seems to be in another world and wants to take his cast with him.

There is no thematic unity to this Ring.  We start in a motel in Texas, and we end up on Wall Street, with some side trips to Baku and an Alexanderplatz filled with hungry alligators.  What does it all mean?  Why is there a comic character (we called him Squiggy!) who continually stops the action with "shtick" that makes no sense?  This is the first immolation scene that features no fire whatsoever, although Brünnhilde does spread some kerosene on the stage.  Nothing ignites.  Perhaps this is the best way to describe Castorf's staging: Nothing ignites.

This is the final time that this Ring will be presented at Bayreuth.  May it rest uneasily forever.
Posted by Vincent Vargas at 1:31 AM