Siegfried at the Festspielhaus 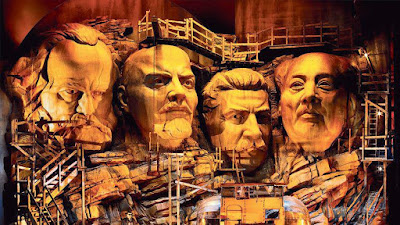 Of the four operas in Frank Castorf's The Ring of the Nibelung, it's Siegfried that has drawn the anger of the audience the most.  It might be the elaborate Communist Mount Rushmore pictured above which is part of the elaborate unit set for this show that gets the audience going.  Although, what has really brought upon the boos is Castorf's decision to have Siegfried kill Fafner with a machine gun, and not with the traditional sword Nothung. Originally the prop weapon was so loud that the original conductor of this production, Kirill Petrenko, asked Castorf to get another weapon that made less noise..  Eventually, Castorf agreed after many complains.

Since its premiere, the first performance of this opera has brought the wrath of the audience after the end of the second act. But it is the last act that tonight really got me upset.  This is the first production where Brünnhilde is put to sleep in one place and gets awaken by Siegfried in another: why?  Further, why does the set revolve from a Communist Mount Rushmore to a recreation of the Alexanderplatz?  And the biggest, and most stupid aspect of the evening: why is the Alexanderplatz overrun by a bunch of alligators that end up swallowing the Forest Bird?  It was an evening of "whys" and Frank Castorf offered no answers to his directorial choices.  There are no thematic ideas here that unify this production, but rather strange decisions that alienate the audience.

If all he wanted was to provoke, then he has succeeded.  Alex Ross in The New Yorker wrote brilliantly about directors who aim to provoke when he wrote his great review of Christoph Schlingensief's Bayreuth Parsifal.  You can read that review here.  Many of the conclusions that he reached can be applied to this production.

Bayreuth is not a toy for opera directors.  It is a place of tradition, and the keeper of the flame of Wagner and Wagnerism.  Thus, there should be some kind of respect when it comes to presenting the composer's operas.  Wagner was a great, tasteful artist.  I hope that this production goes away soon, and I hope Katharina Wagner hires someone who wants to expand the horizons of Wagner staging without mocking the works of the Master.
Posted by Vincent Vargas at 5:26 PM