A Star is Born: this time with Cooper and Gaga 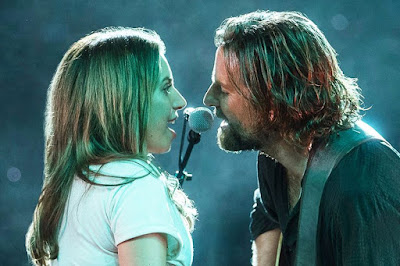 There’s s great line in Bradley Cooper’s new film A Star is Born referring to music being just twelve notes, “and the story repeats again.” It’s a referential line to the history of this well-known show-biz story which began in 1937 with Dorothy Parker and Ben Hecht’s original script for David O. Selznick, and the talents of Fredric March and Janet Gaynor. For many this early Technicolor film is the quintessential version of this story, but the story was told again in 1954, changed to a musical to accommodate the prodigious talents of Judy Garland. This version, helmed by George Cukor remains incomplete with sections missing, but what remains intact is gold. Music also remained when the story was told a third time, this time with Barbra Streisand and Kris Kristofferson in 1976, in perhaps what many consider the weakest of the three versions, although the film has its champions.

One of them is Bradley Cooper. The current version of the story draws much from this version. The story is well-known. Jackson Maine (Bradley Cooper) is a hard drinking famous rocker who meets Ally (Lady Gaga) a talented, but unknown singer. Jackson gives a boost to her career, and the two fall in love and marry. But as Ally’s fame takes off, Jackson’s demons catch up to him. He horribly embarrasses Ally and himself the night she wins the Grammy award, and things go headlong downhill for Jackson to the inevitable tragic conclusion already familiar from the previous versions.

Thanks to Bradley Cooper’s intelligent handling of this material as co-screenwriter and in his directorial debut, A Star is Born has become the film to beat at the Oscars this year. The film features great emotional acting from Cooper, and shows a triple threat Lady Gaga who might just have carved out a niche for herself come Oscar night. Also giving memorable performances are Andrew Dice Clay playing Ally's father, Anthony Ramos as Ally's friend from her time when she was singing at a drag bar, Sam Elliott as Jackson's older brother, and Rafi Gavron as Rez, a music producer and Ally's manager who precipitates the tragic conclusion of the story with his unfeeling approach towards Jackson's alcoholism.

They don't write them like they used to, and Hollywood knows this. They keep resurrecting this property time and again because filmmakers know that audiences love a great tragic love story. This version of A Star is Born speaks to current audiences in a way the previous versions satisfied their particular public. And when it comes to the movies we love to see a performer who has already distinguished herself in another facet of showbiz making a kill on the big screen, and this is exactly what we get when we witness Lady Gaga's great performance.
Posted by Vincent Vargas at 5:17 PM