Aïda at the MET 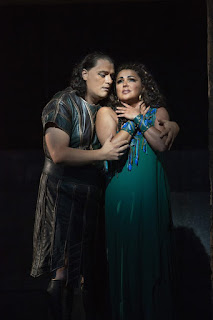 This is my second visit to the Metropolitan Opera in one week. My first visit was the MET’s opening night, and now I'm back here on Saturday night. Twice I have seen performances where the tenor delivers an abysmal performance. I’ve already described Roberto Alagna’s awful Samson, disgracing opening night, and now we can add Aleksandrs Antonenko’s appearance in Aïda. His terrible Radames has no place on the MET's stage.

Mr. Antonenko suffers from a variety of musical and acting ills. But his silent cinema acting could be forgiven if there were a voice behind the silly theatrics. Instead he offers an unfocused attempt at a vocal line where pitch problems abound as he scoops up to most notes. Incredibly enough his top is ringing and secure, which is the reason, I'm convinced, that he still gets hired here and in Europe. But the vocal journey to an above-the-staff destination is one of the most ugly and arduous I have heard in a long time. His curtain call received a cool reception, and a smattering of boos. 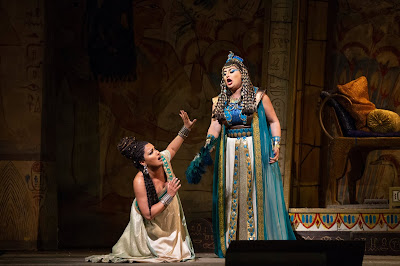 The evening clearly belonged to the ladies. Anna Netrebko offering her first house Aïda was nothing less than a triumph. Those that were fortunate enough to see her first trip down the Nile in Salzburg two summers ago knew that she would not disappoint. Her Ethiopian princess featured sturdy vocalism, beauty of sound, and those precious high notes that make your ears ring. She is truly our current reigning queen of the operatic stage, and I hope that she continues to steer her career in the right vocal direction. Anita Rachvelishvili sang Amneris with vigor and a strong mezzo, and was a credible rival to Ms. Netrebko. 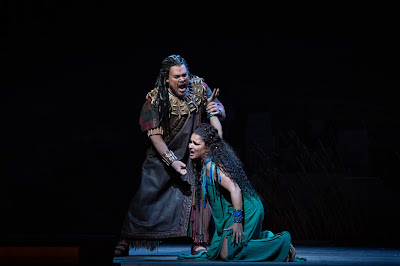 As Aïda's father, Quinn Kelsey delivered an impassioned reading of Amonasro; his steely baritone able to handle the vocal complexities of the role. Dmitry Belosselskiy was a sturdy Ramfis, as long as the role does not go below the staff where his voice disappears. Ryan Speedo Green made a lasting impression in the small role of the King. Conductor Nicola Luisotti led the Metropolitan Opera Orchestra and Chorus in a work which I'm sure they can do with their eyes closed.

A word about the MET's production of this opera.  On the one hand, it is great to see the enormous stage of the MET being used by this larger than life conservative staging. On the other hand, in these days of experimentation, this production is starting to look a bit aged, a bit kitschy. Perhaps, it is time to take a long hard look at this perennial favorite and grace it with the production it deserves, not just use it to bring in the crowds who want to see what opera staging was like thirty years ago.
Posted by Vincent Vargas at 2:04 PM