NYFF: THE BALLAD OF BUSTER SCRUGGS 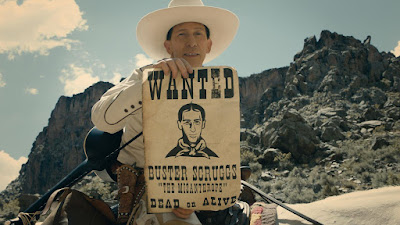 The Ballad of Buster Scruggs, the latest film from Joel and Ethan Coen, is a rare, strange beast. An anthology film consisting of separate stories that go from the ridiculous to the sublime. The first one, featuring a singing cowboy Roy Rogers style was written twenty-five years ago. The film is a homage to the western, perhaps the most neglected genre in contemporary Hollywood. Of course, the Coens grew up in the heyday of the television western craze. So, visually, the stories borrow from Gunsmoke, Bat Masterson, Bonanza, and a myriad of others. There are also homages to the great cinematic westerns of the 40's and 50's as well as the Sergio Leone spaghetti westerns that became a staple in theaters in the decade of the 60's. 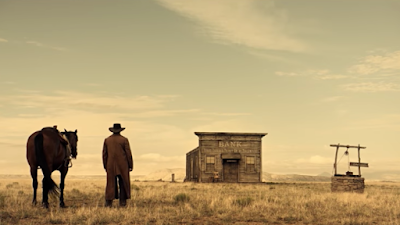 So, the movie is a mish-mash of styles: there's a segment with a singing cowboy (Tim Blake Nelson) who is fast on the draw, who keeps on singing even after he loses a "high noon style" shootout. In another sequence James Franco comes to rob a bank looking like one of those laconic cowboys in the credit sequence of Sergio Leone's Once Upon a Time in the West, complete with a long riding coat. In another segment Tom Waits plays a gold prospector who strikes it rich to the tune of "Mother Machree," and in the longest sequence of the film a wagon train heading west is attacked by the kind of savage Indians that John Ford specialized in, and which I thought Hollywood had done away with in its revisionist phase. Perhaps the most poignant episode features Liam Neeson as a kind of traveling P.T. Barnum who displays one "freak:" an English actor (Harry Melling) with no arms or legs, a talking torso who recites everything from poetry to the Declaration of Independence. The episode builds to a climax of pure heartlessness, making it for me, the most satisfying of all the segments.

At the Q&A after the film, Kent Jones, the head of the selection committee at the New York Film Festival suggested that the unifying theme of the six stories is mortality. I'm sorry to say that this statement caught the brothers by surprise. Or were they just kidding, and playing to the crowd? With the Coens you never know. However, one thing's for sure: the movie is a very entertaining trifle which will surely please their fans.
Posted by Vincent Vargas at 10:09 PM