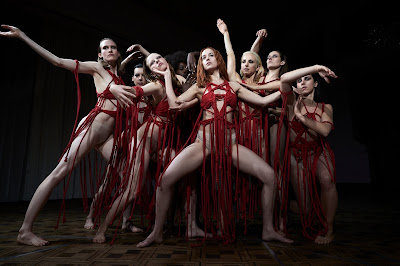 Luca Guadagnino, the much-praised director of Call Me By your Name returns to the theme of inter-generational relationships in his rethinking of Dario Argento's 1977 thriller Suspiria. Whereas the classic horror film was the first of a proposed trilogy depicting the theme of "Three Ancient Mothers," with the results being the familiar "giallo" style for which the Italian filmmaker is best known, Guadagnino's take on the film is a self-contained two and a half hour extravaganza taking the bare-bones story of the original, and riffing on socio-political themes not really present in the original film.

In this retelling we meet Sussie Bannion, a young ingenue from America (Dakota Johnson), aching to escape her Mennonite upbringing, who travels to a divided West Berlin to enroll in the famous Helena Markos Dance Company, a school run by a Pina Baush look-alike named Madame Blanc (Tilda Swinton). Almost immediately the new girl falls under the spell of Madame Blanc, who recognizes in her an innate talent for dance, and the "je ne sais quoi" necessary to become a great dancer. At the same time, an elderly psychoanalyst (also played by Tilda Swinton wearing a ton of makeup), with a past dating back to the days of the Third Reich, is investigating the disappearance of one of the dancers in the company, and the alleged claims that the school is run by a coven of witches.

While all of this proves to be quite enigmatic, the movie fairly quickly falls off the rails as it tries to bite more than it can chew. Apparently in Guadagnino's mind it is not enough to just make a horror film. The new Suspiria, which is divided into acts like a German Expressionistic film of the silent era, ie, Nosferatu, features the Baader-Meinhof political landscape of Germany in the decade of the 1970's, as well as the vivid ghosts of National Socialism. This, together with a running time of 152 minutes, makes it a bladder-buster of a horror film, too long for a genre which, like comedy, works more effectively when it adheres to a shorter running time. Unfortunately, the film denouement is one of the most extravagant spectacles I have seen in quite a while. Never a good idea to outdo the original. Dario Argento is an excessive filmmaker, no one will argue with that, but in paying homage to the master, Guadagnino totally goes overboard.

So, should you bother with this remake? Try the new Suspiria if you like to be engrossed in a film that asks more questions than it answers, and if you enjoy the experience of a polemic work that's sure to spark some very interesting cinematic conversation.
Posted by Vincent Vargas at 10:00 PM