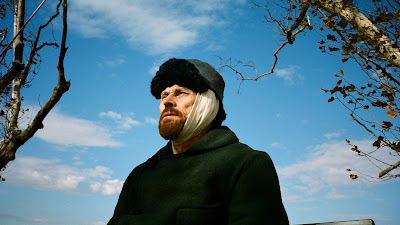 The director of At Eternity's Gate, Julian Schnabel became a sensation during the 1980s with his "plate paintings:" large scale canvases set on broken ceramic plates. He emerged as the most famous of the bad-boys of that artistic generation that also included David Salle, Keith Haring author Jay McInerney and Jean-Michel Basquiat: artists that made downtown Manhattan the epicenter of the artistic world. As a matter of fact, when Schnabel traded in his canvases for a movie camera, his first project was a biopic of the late Basquiat. Now Schnabel turns his cinematic attention to another bad-boy artist: the infinitely tragic Vincent van Gogh and his last tortured days in Arles, in the south of France: frantic days in which the artist descended into madness while at the same time capturing the light of Arles in one brilliant canvas after another. Van Gogh stayed at Arles for eighty days, and managed to paint seventy-five canvases. The large majority of them the well known masterpieces he is best known for.

Essentially the film follows the relationship between Vincent (an incredible Willem Dafoe) and his brother Theo (Rupert Friend), as well as the friendship between van Gogh and artist Paul Gauguin (Oscar Isaac). But like Schnabel's early broken canvases, the film is a disjointed look at the artist's downward spiral into madness, mutilation and suicide. Certainly it is not Lust for Life, Vincente Minelli's 1956 biopic starring Kirk Douglas as the tortured Dutch artist.

Willem Dafoe's understated van Gogh is the highlight of this work, and the glue that keeps this film together. Mr. Dafoe has been the darling of the Independent film sect lately, morphing from one character to another with the greatest of ease. He can be Pier Paolo Pasolini in Abel Ferrara's 2014 biopic of the murdered Italian filmmaker, or he can become Bobby, the manager of the Magic Castle hotel in last year's great The Florida Project. His van Gogh might just be his greatest role since he played the Son of God in Martin Scorsese's The Last Temptation of Christ.

If your idea of a biopic is not a definitive reconstruction of the past, and if your taste in film favors a narrative of moments, impressions and fragments, then you will certainly enjoy this arresting, luminous film.
Posted by Vincent Vargas at 6:31 PM