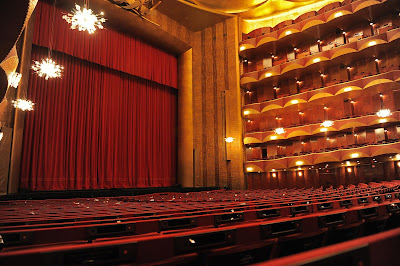 The Metropolitan Opera has decided to cancel the September 21 Opening Night Gala of the new production of Giuseppe Verdi's Aida. Even though I had bought tickets to this performance a while back, I was not very hopeful that the performance was ever going to happen, and if it did, how safe would it have been to attend? How can an audience socially distance seating in rows next to one another? Would the dress for the evening have been black tie, mask and rubber gloves? And what about the singing coming from the stage out to the audience? Aida is arguably opera's grandest spectacle (no matter how the new production was planning to tone down that aspect of the work). The very idea of a sizable chorus and soloists launching pellets of saliva across the stage, pass the orchestra pit and into the auditorium would have certainly made the number of pandemic victims spike once more. We have all heard the news reports detailing how a chorus's rehearsal sent many of its members to the hospital, all infected with the COVID-19 virus, at the outset of the plague.

Traditionally, the Metropolitan Opera Chorus returns for rehearsals for the new season in August. Things being what they are currently, and in addition to the massive protests going on in the country, where social distance seems to be all but a forgotten footnote to the national rage, makes it clear that the traditional festive Opening Night, the official New York City beginning of the new art season, just wasn't going to happen.

So, the opera will remain dark and solitary for a few more months. In his letter to subscribers, Peter Gelb wrote about a possible opening December 31st, the traditional day for the New Year's Eve Gala. Let's see what happens.
Posted by Vincent Vargas at 6:58 PM