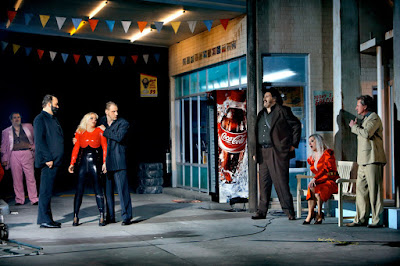 Perhaps no production of The Ring of the Nibelung at Bayreuth has caused so much controversy in the last two decades as Frank Castorf's staging of Richard Wagner's tetralogy. Before he came to the Green Hill to stage Wagner's epic work, Castorf was well-known in Germany for his avant-garde productions at Berlin's second largest state-owned theater, the Volksbühne am Rosa-Luxemburg-Platz. Katharina Wagner knew exactly what she was getting when she hired him. His production of Die Meistersinger von Nürnberg at the Volksbühne, for example, used only one opera singer (the rest were vocally untrained actors) and the opera narrative was often interrupted by readings of texts by Ernst Toller, a Jewish writer who managed to escape Nazi Germany, and who later committed suicide by hanging himself in a New York City hotel room in 1939. As a result of this production, Castorf's contract at Bayreuth included a clause forbidding him to tamper with Wagner's original words or music.


But that did not stop Mr. Castorf to change just about everything else in the four part music drama. Das Rheingold took place in the USA along Route 66 at a cheap motel. Die Walküre's drama was moved to the oil fields of Azerbaijan, while Siegfried took place under a fictitious Mount Rushmore that replaced the American presidents with famous communist leaders, and Götterdämmerung featured Berlin's Alexanderplatz with its famous World Clock filled, not with tourists, but hungry crocodiles.

What did it all mean? I saw the production in 2017 on my second trip to Bayreuth. By this time the knowledgeable Bayreuth audience knew what to expect. Gone were the boos of opening night that erupted most violently during the premiere of Siegfried. Audiences were not ready for the title character to kill Fafner with a very loud machine gun, and they were not ready to see a nest of reptiles invade Berlin trying desperately to eat the Forest Bird (who is not even supposed to be in the third act!). In 2017 the boos were gone, and so was Castorf who did not take a vow during any of the four evening that I attended.


What Castorf did was to take Wagner's music and adapted it to his own strange story. He even added a mute character throughout the four nights who resembled Squiggy, the funny character played by David Lander in the ABC sitcom Laverne and Shirley.

Just to prove that I'm not making any of this up, you can see the whole bloody thing for yourself. The production has appeared on YouTube, and if you are interested in Wagner (which is why you are here!), and especially if modern opera stagings are your cup of tea, take a look at the embedded Youtube links I have provided.


I suggest you go to it right away. These videos tend to disappear overnight rather fast because, perhaps, they should have never been uploaded in the first place. But such is the nature of the Internet.  Enjoy this production, if such a thing is possible. Oh, and by the way, if you close your eyes you will hear some marvelous singing in all the operas. And maybe this is the best way to "enjoy" Castorf's Ring.

Does anybody know if there are plans to release this Ring on DVD/BluRay?

Posted by Vincent Vargas at 7:26 PM