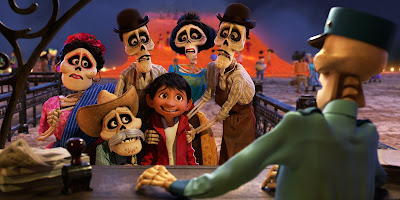 Coco, the new animated film from the Disney/Pixar Studios aims to bring the dead back to life, in a delightful, colorful fantasy set in Mexico during the Day of the Dead celebration. The film centers around Miguel, a young boy who wants to be a singer in a household where music is forbidden as a result of events that occurred many generations ago in his family.  Now, his relatives are shoemakers, but Miguel longs to become a popular singer like his idol, the late Ernesto de la Cruz, a character based on Jorge Negrete and Pedro Infante, two popular Mexican actor/singers of the Golden Age of Mexican film in the 1940s and 1950s.  During the celebration of Día de Muertos, Miguel steals his hero's guitar from his mausoleum in order to enter a song contest and this leads to an unexpected voyage to the Land of the Dead, which looks like a Disneyland version of the city of Guanajuato.

The film is full of eye-popping visuals that have been carefully researched and beautifully rendered by the production team headed by director/screenwriter Lee Unkrich.  It's a collection of lovingly recreated South-of-the-Border stereotypes, but it is all done in such an endearing way that we accept it.  This might be a Mexico where El Chapo never existed, but it doesn't matter.

Writer Umberto Eco, referring to the film Casablanca, once wrote that "two clichés make us laugh, a hundred clichés move us..." and that's what Coco boils down to.   If you think it is a gringo version of a Mexico that has never existed, an antidote to Luis Buñuel's Los Olvidados, or Alejandro González Iñárritu's Amores Perros, then you are totally missing the point.  Go to see it, and when a tear rolls down your eyes, you'll realize that you are watching an extraordinary little film.
Posted by Vincent Vargas at 10:01 PM