COCO is a hit! 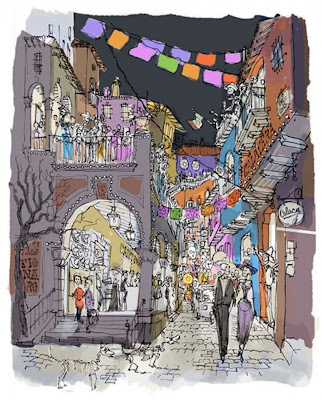 Over the Thanksgiving Holiday weekend, audiences in the United States flocked to theaters to learn what Mexican moviegoers had proven more than a month ago: that Disney/Pixar’s Coco is an authentic hit.  The animated film soared to a $71.2 million domestic debut to win the five-day holiday frame, topping such superhero behemoths as Justice League and Thor: Ragnarok, according to studio estimates. Coco grossed $49 million for the three-day domestic weekend, and has now pulled in a total of $153.4 million worldwide.

The film was years in pre-production, and this care really shows in its authenticity and respect towards Mexican culture, especially the Day of the Dead, the religious holiday that is at the heart of the film.  The drawings above are two of many that were done in order to achieve the look of the film.  Basically, the Disney/Pixar artists conjured up a city of the Dead where its citizens are happy to be on the other side. I recommend this film, especially during this holiday season.
Posted by Vincent Vargas at 6:02 AM