Dmitri Hvorostovsky is dead at 55 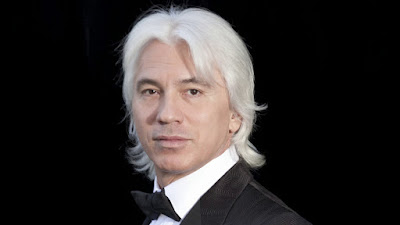 The great Dmitri Hvorostovski, one of opera's great baritones, and a specialist in the operas of Giuseppe Verdi died in London at the age of 55 after a long battle with brain cancer.  He was one of the shining lights of the operatic stage, a dashing, sexy figure with his mane of silver hair which he wore long, which he almost never hid from the public, and which he always successfully incorporated into his operatic characters.  Only once did I see him hide his silver-maned hair: his last Rigoletto at the MET, where, unbeknownst to his adoring fans, he must already have known that he had developed a deadly tumor in his brain.

Hvorostovski learned to play the Metropolitan Opera, a gigantic house that scares many European-trained singers, and where he sang 180 performances. When I first heard him live his voice, though compact, beautiful and secure, sounded small: a perfect voice for a European opera house.  His breathing between phrases was the loudest I had ever heard.  His approach to a score, however, sounded like no one else: always the tell-tale sign of a great artist.  As his voice matured his instrument became stronger, more secure, but the original beauty of his tone always remained.  His performances at the MET, before his illness, were outstanding, and his lieder recitals always revealed a consummate artist comfortable being accompanied just with a piano.  His performances of Russian folk songs and popular romantic songs were very important to him.  In an interview with The New Yorker magazine, he remembered a concert he gave at the age of 22 in a bread factory in central Siberia, near the town of Krasnoyarsk, his birthplace, in below-freezing weather. The audience, wearing fur hats and warm boots, was in tears.

No one looked like him (his hair turned completely white by the time he was 30), no one sounded like him.  Perhaps the complex role of Eugene Onegin, one of his specialties, suited him so well because he was as complex as the title role of that great Alexander Pushkin poem. Now that he has entered immortality, he will be missed.
Posted by Vincent Vargas at 1:33 AM