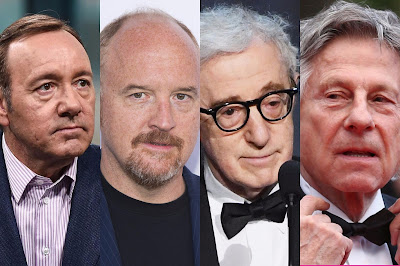 The sexual allegation snowball rolled down Hollywood Boulevard with a brute force, trying to survive the L.A. heat, but never losing its hate-power.  It first knocked down Harvey Weinstein with the greatest of force.  Then it lingered there gaining further strength, whacking him countless times.  Then it took a turn towards the east running over Kevin Spacey, exposing the famed actor of things most show business and non-show business people already suspected.  Yesterday comedian Louis C.K. got hit badly as well, and at least he has admitted to these past major peccadillos.

Kevin Spacey, who says he does not remember abusing Anthony Rapp, Tony Montana, or Harry Dreyfuss (son of Richard), has been dropped not only of Netflix's House of Cards, but also from the upcoming, completed movie All the Money in the World, where he was to play billionaire J. Paul Getty.  He has been replaced by Christopher Plummer.  There goes that Oscar nomination!  And after this summer's Baby Driver, Spacey's career was going full-gear.  The J. Paul Getty movie would have been the one-two punch he needed for Oscar gold, perhaps.  I wonder if the Baby Driver DVD, Blu-ray sales are taking a beating.  The scandal came out just as the film was being made available on home video.

Even though Hollywood seems to be cleaning house, as far as I know, Woody Allen's new movie Wonder Wheel is still slated to come out on December 1.  The director continues to operate under the shadow of sexual abuse allegations.  Also, when director Roman Polanski was arrested in Switzerland for the alleged rape of an underage girl, Woody Allen, Alejandro González Inárritu, Martin Scorcese, Wong Kar-wai, Wim Wenders, and Pedro Almodóvar, among others, signed a petition for his release.

It's not that Mr. Allen and Mr. Polanski have achieved the kind of clout that makes them untouchables, it's just the proven fact that America loves to knock down its heroes just to see them rise again.  Celebrity second acts from Robert Downey, Jr., Mickey Rourke to sports announcer Marv Albert and Mel Gibson are legendary.  They all spent years in Purgatory, and crawled out more popular than ever.  Based on this, something tells me that the accused superstar of today will turn out to be the comeback kid one sunny day in the future.
Posted by Vincent Vargas at 3:02 PM