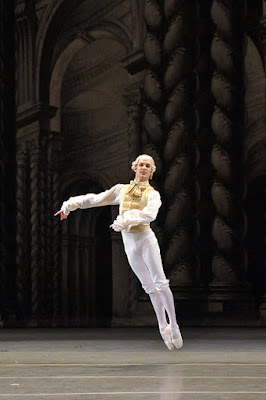 On the very last day, and the very last performance of this season's American Ballet Theatre, I decided to catch their swan song, a revival of Tchaikovsky's Sleeping Beauty. My knowledge of the ballet is still below neophyte level, I have only seen ABT's production once before. I grew up watching Walt Disney's brilliant widescreen animated retelling of the fairy tale which uses many musical themes from the work. It's music that I have grown up with, but while in my mind a certain mysterious musical segment will always belong to Maleficent's creepy raven, it is fun to hear this same music accompanying a pas-de-deux between the White Cat and Puss-in-Boots.

It was the last performance of ABT, and apparently they were not leaving anything behind. Going to my seat for the first time, When I showed one usher my ticket, and she pointed in the general direction of my seat, she did not perform the action that always follows that brief encounter. They ran out of playbills! Now, I have been attending the Metropolitan Opera House since the late 1970's, and never has the MET ran out of playbills. How disconcerting. I asked the usher who was dancing, and she had trouble remembering the names of the principals. I spent the first act without a playbill, not recognizing who was on stage, and surrounded by an audience who also spent the performance with empty hands.  As soon as the first intermission began I went up to the Parterre Boxes. If anybody is going to have a playbill is going to be the Parterre Boxes level, I told myself. Those are the expensive seats. When I inquired, the usher there smile, and asked me "how many do you want?" I should have asked for two, but for some reason one was enough for that evening.

Sleeping Beauty is Marius Petipa's most epic piece of choreography, with dozens of dancers, many in costumes that bring to life such fairy tale favorites as Red Riding Hood and the Wolf, the Ogre and his Ogress wife, as well as Bluebeard and Sheherezade. Buried in all of this is a rather simple story of how the evil fairy Carabosse (danced with tongue-in-cheek malevolence by Craig Salstein) curses Princess Aurora (Cassandra Trenary) until true love in the form of Prince Désiré (Joseph Gorak) breaks the spell.

Maybe that's why ABT ordered so few playbills. Everybody knows this story, and everybody knows how it will end.
Posted by Vincent Vargas at 6:52 PM