W.A. Mozart's THE MAGIC FLUTE at the Mostly Mozart Festival 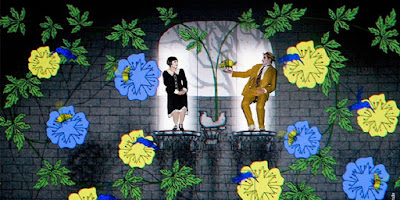 What a sheer delight is the Barrie Kosky, Suzanne Andrade production of Mozart's The Magic Flute, with incredible animations by Paul Barritt and his company 1927. This whimsical staging which gets its inspiration from silent film, the cabaret world of the German Weimar Republic, and German Expressionism has gone round the world, being presented in the Komische Oper Berlin, The Los Angeles Opera, as well as in the Teatro Real, Madrid. Now this staging comes to New York for the first time under the banner of the Mostly Mozart Festival, with the orchestra conducted by Louis Langrée.

Here is a promotion video that was made for the L.A. Opera premiere of this staging.


The opera is being performed in the original German, and you might remember that Mozart and his librettist Emanuel Schikaneder came up with a "singspiel" rather than a work with formal recitatives. Between the musical numbers there is dialogue. Here the words of the dialogue are shone on the screen "silent movie style," while an 18th century fortepiano accompanies it with music from Mozart's two fantasias for piano K. 475 in C minor and K. 397 in D minor. As a result, the singers never speak the dialogue, and the illusion of a silent movie is maintained.

In this production Tamino is a silent movie matinee idol; he could be Valentino, or Fairbanks, or Ramón Novarro. Papageno is Buster Keaton, Tamina is Louise Brooks, and Monostatos is Count Orlok from Nosferatu. But aside from casting the characters as recognizable figures from the silent cinema, what makes this production one of the best things I have seen on an operatic stage in a while is the marriage between live action and animation. The stage is a screen where Mr. Barritt's imagination shines and is allowed to go wild. The Queen of the Night as a gigantic black widow spider, and a pack of wild hell-hounds firmly held by Count Orlok's leash are two of the effects that really captivated me and the rest of the audience. But if you experience this production, I am sure you will have your favorite moments as well. Also outstanding in its planning is the fact that the visual effects don't just work for an audience sitting stage center. I was a bit off to the side, and none of the magic was lost.

In this video, Australian director Barrie Kosky (and friend) introduces the production, while allowing you to take a peek at some of the segments of the work.