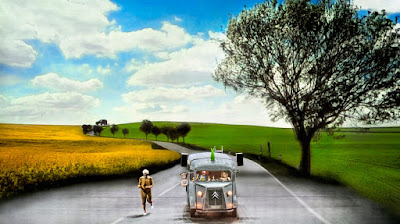 The Bayreuth Festival began today with a new production of Richard Wagner's romantic opera Tannhäuser, directed by Tobias Kratzer and under the musical leadership of Valery Gergiev, both men making their Bayreuth debuts this year. For the director this opera goes beyond the conflict of profane versus pure love; he sees it as a clash between high and lowbrow art. Mr. Kratzer noticed that the composition of this work took place at a time when Wagner himself did not know whether he was going to go down in history as an anarchist or as a composer, or even if he was going to be remembered at all. Given this background to the work Mr. Kratzer states that "Wagner is writing about two models of life ... two conflicting love models." He goes on to explain that this approach to the story "makes it more contemporary than if you restrict the whole thing to the whore versus saint conflict of Romanticism." 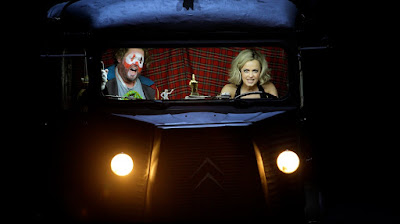 Thus we are presented with a van with a green rabbit on top, and outside speakers, driving through the Romantic pine forests of Germany, and a biogas plant (an in-joke to the last Bayreuth production of this work by Sebastian Baumgarten). Driving the van are Venus in a skintight suit (Elena Zhidkova), and her lover Tannhäuser (Stephen Gould), a clown (shades of Josef von Sternberg's 1930 film The Blue Angel where a distinguish English professor marries a lusty cabaret performer only to find himself degraded to the role of clown -- literally). Riding with them, in silent roles, are Oskar the midget (Manni Laudenbach) and famed black cabaret drag queen Le Gateau Chocolat. The Venusberg is a simple German cottage complete with human-sized garden gnomes, a perfect reason for Le Gateau to don her Snow White outfit straight out of the Walt Disney film. As the relationship between Venus and Tannhäuser deteriorates during the Venusberg scene we discover that only one item makes any sense for him: a duffel bag with a vocal score that says "Wagner" on the front cover, presumably the score to this opera itself. When he invokes the name of the Virgin Mary, Tannhäuser is transported to Bayreuth itself, and we find out that he was a singer who went rogue. He is welcomed back to the Green Hill, but not by Elisabeth (Lise Davidsen) who usually is absent from the first act. In this staging she makes an appearance and formally welcomes her former lover with a slap on the face.

The concept of using Bayreuth as the background for a production is reminiscent of Stefan Herheim's great staging of Parsifal in 2008 where Wahnfried became the point of departure for a production that chronicled the story of Germany through the World Wars and reconstruction. As Act II begins we realize that Mr. Kratzer will stage this act as if it were a performance of the act itself, even with video from backstage showing stage managers. The production in this ersatz staging is nothing like Bayreuth has seen since 1951. The costumes look like a pre-Wieland Wagner staging from the 1930's. The conflict between high and low art comes to a head during the song contest. Eventually, the characters from the first act infiltrate the Festspielhaus, and rush the stage at the mention of Venus and Tannhäuser's praise for carnal love. In a video cameo Katharina Wagner herself calls the police to arrest the intruders, and when they drive up the Green Hill they handcuff Tannhäuser and take him away as he sings the words "Nach Rom!" 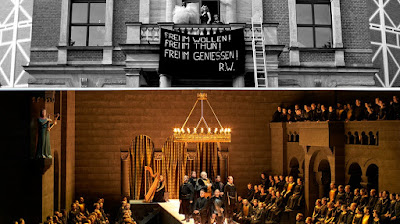 As the opera continues into the concluding act the production becomes less Wagner's story, and begins to be overpowered by Mr. Kratzer's conceit. The third act takes place in a junkyard invaded by pilgrims who look more like refugees. Wolfram dresses up in the clown outfit and wig that Tannhäuser wore in Act I and, at the urging of Elisabeth herself, has sex with her in the van. Tannhäuser eventually returns only to find that Elisabeth has committed suicide. 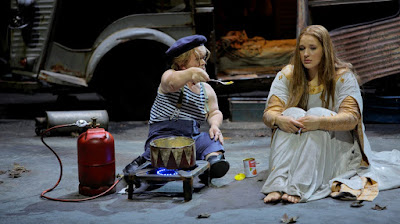 There was amazing singing from all the principals, especially Stephen Gould, who is no stranger to the role of Tannhäuser. Lise Davidsen sang with a smooth, powerful voice that beautifully exemplifies this character. Markus Eiche has the perfect voice for Wolfram, and his song to the Evening Star was a highlight of the concluding act, pity that so much of the staging made very little sense. Valery Gergiev lead a competent reading of the score, but a personal vision of the work was missing. His appearance on stage during the curtain calls drew a smattering of boos.

Needless to say the production team was greeted by ferocious boos by about half of the audience, although applause seemed to have won out in the end due to the great quality of singing and acting by all. Not a bad start for this year's festival. Let's hope that the critics do not totally kill this production, since there are many good ideas, especially in the first act. I'm sure Mr. Kratzer will be refining the production as it makes a comeback in years to come.
Posted by Vincent Vargas at 3:20 PM