Once Upon a Time ... in Hollywood: new Tarantino film 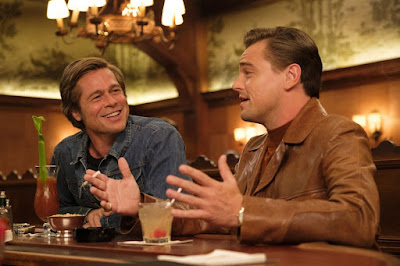 With a title that evokes two of director Sergio Leone’s great films, as well as the world of fairy tales, which imply make believe and wish fulfillment, Quentin Tarantino’s ninth film Once Upon a Time...in Hollywood is a love letter to the film industry at a time when great sweeping changes were going on in cinema. A young generation had taken the reins, European new waves were challenging the very nature of film entertainment, the American studio system had crumbled, and dark foreboding clouds were gathering in the horizon. The summer of love was gone, and ahead, horrible events would occur behind the gated mansion of an up-and-coming movie star and her famous director husband. Or will they? The director riffs on the Tate-LaBianca murders by the Charles Manson family, an event triggered by the lyrics of an album from a British group that already was showing tears at its seams. Tarantino reinvents this era in a highly ambitious wide canvas that bears the gravitas of apocalyptic times.

Next door to Sharon Tate (Margot Robbie) and Roman Polanski (Rafal Zawierucha) lives Rick Dalton (Leonardo DiCaprio), an actor who specializes in World War II B pictures and TV westerns, and who now is on the downward slope of his career. His buddy Cliff Booth (an excellent Brad Pitt) is his stunt double, chauffeur and confidant. Cliff's shady past poses an obstacle for him to get work, as a matter of fact, it is only because of Rick that he gets any film work at all. And it shows, while Rick lives in the Hollywood hills in a beautiful house with a pool, Cliff lives in a derelict trailer with his pit bull next to a drive-in.

The film is an engrossing and kaleidoscopic recreation of a time that Tarantino did not personally know or yearn for in any kind of nostalgic way; after all he was a six year old child when the events of this film take place. As always the decade is brought to life through the world of cinema, which Tarantino knows better than any other director working today. Therefore, the film is highly detailed with homages and illusions to the famous spots in L.A. and the theater marquees announcing the films of the time. Some of these are well-known, but in the great tradition of film geekdom, at whose throne Tarantino sits, the majority are rare and forgotten. As far as the director is concerned, though, they are treasures to be discovered by a new contemporary audience.

Aside from the performances of DiCaprio and Pitt, both surely destined for Oscar nominations, there are wonderful moments from Margot Robbie, whose Sharon Tate is a free spirit radiant beauty who visits a Hollywood theater so she can see her own performance in the film The Wrecking Crew, alongside Dean Martin. Powerful also is Bruce Dern in a tiny cameo playing the blind, aged owner of a Western Ranch being rented by the Manson family.

Without a doubt, Once Upon a Time ... in Hollywood is Tarantino's most accomplished film, and one of the best movies of the year. Gone are the jerky rhythms of many of his past films, here replaced by a deliberately smooth glide when it comes to camera movement as well as story development. A new Tarantino? Not exactly. There's still a whole lot of the old Quentin that we all love, but this film shows signs of artist maturity, which is definitely not a bad thing.
Posted by Vincent Vargas at 11:19 PM