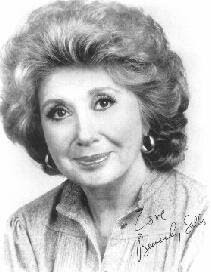 Soprano Beverly Sills died of cancer in New York on Monday. She was "the" opera diva when I started going to performances, and was very fortunate to see her in The Barber of Seville at the New York City Opera, a performance which also starred the young Samuel Ramey, and which was conducted by Sarah Caldwell. Later on, at the Metropolitan Opera, I saw her Thais, with baritone Sherrill Milnes, as well as her performance in Don Pasquale, alongside the great Alfredo Krauss.

For many, Ms. Sills was opera, and her incredibly bubbly personality led this art form on both sides of the stage for many years. She will be greatly missed.

Following are excerpts from the obituary from the Associated Press.

NEW YORK (AP) -- Beverly Sills, the Brooklyn-born opera diva who was a global icon of can-do American culture with her dazzling voice, bubbly personality and management moxie in the arts world, died Monday of cancer, her manager said. She was 78.

It had been revealed just last month that Sills was gravely ill with inoperable lung cancer. Sills, who never smoked, died about 9 p.m. Monday at her Manhattan home with her family and doctor at her side, said her manager, Edgar Vincent.

Born Belle Miriam Silverman in Brooklyn, she quickly became Bubbles, an endearment coined by the doctor who delivered her, noting that she was born blowing a bubble of spit from her little mouth. Fast-forward to 1947, when the same mouth produced vocal glory for her operatic stage debut in Philadelphia, Pennsylvania, in a bit role in Bizet's "Carmen." Sills became a star with the New York City Opera, where she first performed in 1955 in Johann Strauss Jr.'s "Die Fledermaus." She was acclaimed for performances in such operas as Douglas Moore's "The Ballad of Baby Doe," Massenet's "Manon" and Handel's "Giulio Cesare," and the roles of three Tudor queens in works by Gaetano Donizetti.

It was not until late in her career that she achieved the pinnacle, appearing at the Met, the nation's premier opera house.

Her debut on that stage didn't come until 1975, years after she became famous. In her memoir, she said longtime Met general manager Rudolf Bing "had a thing about American singers, especially those who had not been trained abroad: He did not think very much of them."

Sills' Met debut, arranged after Bing retired, was in "The Siege of Corinth," and she recalled that "I was welcomed at the Met like a long-lost child." (She also recalled having a couple of friendly encounters with Bing and found he "could not have been more charming.")

Sills retired from the stage in 1980 at age 51 after a three-decade singing career and began a new life as an executive and leader of New York's performing arts community. First, she became general director of the New York City Opera.

Under her stewardship, the City Opera, known as the "people's opera company," became the first in the nation to use English supertitles, translating operas for the audience by projecting lyrics onto a screen above the stage. The Met followed, later adopting its titles on the back of audience seats.

In 1994, Sills became chairwoman of the Lincoln Center for the Performing Arts. She was the first woman and first former artist in that position.

After leading the nation's largest arts complex through eight boom years and launching a redevelopment project, she retired in 2002, saying she wanted "to smell the flowers a little bit."

After six months, she was back.

"So I smelled the roses and developed an allergy," she joked as she accepted a position as chairwoman of the Met. "I need new mountains to climb, which is why roses don't appeal to me."

Sills was a master fundraiser, tapping her vast network of friends and colleagues for money that bolstered not only Lincoln Center but also non-artistic causes such as the Sloan-Kettering Cancer Center and the March of Dimes, a job she called "one of the most rewarding in my life."

She also lent her name and voice to the Multiple Sclerosis Society; her daughter, Muffy, has MS and was born deaf.

At a 2005 Manhattan benefit for the National Multiple Sclerosis Society, Sills told an audience that included her daughter: "One of the things that separates the two-legged creatures from the four-legged ones is compassion."

Sills' compassion extended to her autistic son and to her husband, who lived with her at their home as his Alzheimer's disease progressed.

Still, through harrowing personal times, she never lost her own sense of humor, accompanied by a billowing ripple of laughter that was all the more warming because it was born not of frivolity but of a survivor's grit.

Stage fright was foreign to her. Before curtain time, she would make phone calls or munch on an apple, then sweep on to deliver her roles with exuberance.

A coloratura soprano, Sills was for years the prima donna of the New York City Opera, achieving stardom with critically acclaimed performances in Verdi's "La Traviata" and Donizetti's "Lucia di Lammermoor," among dozens of roles.

She is credited with reviving musical styles that had gathered dust, such as the Three Queens -- the trio of heroines of Gaetano Donizetti's "Anna Bolena," "Maria Stuarda" and "Roberto Devereaux" -- in which she starred as Elizabeth, a role she called her greatest artistic achievement.

"Opera is music AND drama," she wrote in her 1976 memoir, "Bubbles: A Self-Portrait." "I'm prepared to sacrifice the beautiful note for the meaningful sound any time. ... I can make a pretty tone as well as anyone, but there are times when the drama of a scene demands the opposite of a pretty sound."

As chairwoman of the Met, she was instrumental in proposing Peter Gelb, now general manager, for that position, a move that brought a new leader who injected a dose of new moves that pushed up attendance and ticket sales.

Citing personal reasons, Sills bowed out as Metropolitan Opera chairwoman in January 2005, saying, "I know that I have achieved what I set out to do." At the time, she had recently suffered a fall and was using a wheelchair.

Sills grew up in a "typical middle-class American Jewish family," as she put it. She was first exposed to opera by listening to her mother's record collection. She began taking weekly voice, dance and elocution lessons as a young child and at age 4 appeared on a local radio show called "Uncle Bob's Rainbow Hour." When she was 7, her name was changed to Beverly Sills -- a friend of her mother's thought it was a more suitable stage name -- and she began 34 years of study with vocal coach Estelle Liebling.

Her opera debut came in 1947, in the role of Frasquita in "Carmen" with the Philadelphia Civic Opera. For several years, Sills sang opera when she could, touring twice with the Wagner Company, while performing in the Catskills and at a Manhattan after-hours club.

In 1956, Sills married Peter Greenough, a journalist who later quit the news business to manage the family's affairs as his wife's career flourished. He died in 2006.

After a whirlwind of performances in the early 1960s, Sills hit her stride as Cleopatra in Handel's "Julius Caesar" in 1966, when the New York City Opera officially opened its new home at Lincoln Center. "When the performance was over, I knew that something extraordinary had taken place," Sills wrote. "I knew that I had sung as I had never sung before, and I needed no newspapers the next day to reassure me."

Besides Greenough's three children from a previous marriage, the couple had two children of their own, Peter Jr., known as "Bucky", and Meredith, known as "Muffy."

Posted by Vincent Vargas at 9:01 AM