Getting Ready for Harry Potter 7 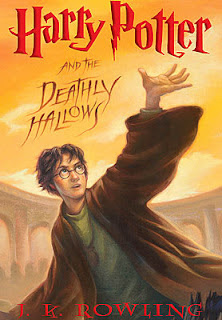 As of today, the latest and final Harry Potter book, Harry Potter and the Deathly Hollows has been leaked, in real and fake versions, in numerous places on the Internet. As conflicting rumors and subpoenas from Scholastic, the novel's American publisher, fly through the air with the speed of a Hogwarts broom, author J.K. Rowling is pleading that people do not reveal plot points, and that they allow readers, especially children, to discover the novel on their own without spoilers.

A few days ago, what appeared to be the pages of Book Seven was photographed and uploaded to several places online. The 73 megabyte file, which consists of dozens of digital photos, was immediately removed, although as of today it is still popping up in various places on the net. Further, since the pages themselves are difficult to read, some enterprising soul has typed the text of the first ten chapters of the novel, turned it into a .pdf file, and has uploaded it to various Harry Potter-oriented newsgroups.

Although some speculate that this might be a hoax, and that the real novel remains protected in sealed boxes in thousands of bookstores around the country, the majority of Harry Potter fans believe that what appeared online is the real thing, and that despite the millions of dollars spent by Scholastic in securing its Saturday release, this last Harry Potter adventure has been thrust on the public a few days earlier.

The New York Times has already reviewed the work in the newspaper's online edition, drawing a stinging response from Bloomsbury, the novel's British publisher. In her comments, reviewer Michiko Kukutani revealed that the book was bought on Wednesday in a New York City bookstore.

The following is an excerpt from an article from Reuters UK concerning the New York Times review and the recent leaks that have occurred in the United States:

"Bloomsbury called the review "very sad", adding that there was only one more day to wait until the official release in book stores around the world. Twelve million copies of the book have been printed for the U.S. market alone.

We will be relying on the support of the media to allow the fans to read the book for themselves rather than having to see reviews that may have been based on fake postings on the Internet," said a spokeswoman.

She likened recent events in the United States to the Boston Tea Party, a protest by American colonists against Britain in 1773.

"But over here it is blockades as usual, with the embargo being enforced unflinchingly and without exception by all our customers," she said.

"We would like fans all over the world to be able to come to this book on July 21 to find out for themselves what's going to happen. It's only a few more hours to go."

In a generally positive review, writer Kakutani gives away some plot details, including how many characters die and what "deathly hallows" means, but refrains from answering the biggest questions of all.

"Ms. Rowling has fitted together the jigsaw-puzzle pieces of this long undertaking with Dickensian ingenuity and ardor," the review said.

Posted by Vincent Vargas at 9:40 AM