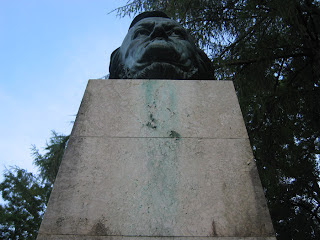 The myth goes that the Nazis were great lovers of the music of Richard Wagner. When you see the Bayreuth Festspielhaus filled with members of the party one begins to believe the myth. It was just part of the carefully crafted propaganda machine for which the Nationalsozialistische Deutsche Arbeiterpartei (The Nazis) were well known. The reality was that most Party members hated Wagner's music, and that Adolf Hitler forced his men to attend performances at the Green Hill. All this according to Charlotte Higgins's article in The Guardian which follows below.

According to popular mythology, night after night during the Nazi era Germans flooded into opera houses to watch enthralled as Rhinemaidens and Valkyries dominated the stage.

But Wagner, far from being the Third Reich's "house composer", actually became much less popular during Hitler's rule, according to new research.

The Germans were much more keen on Carmen, Bizet's tale of a soldier's scandalous obsession with a Gypsy; and on Madama Butterfly, Puccini's opera about an officer's doomed liaison with a Japanese courtesan - neither particularly appropriate tales by the standards of Nazi ideology.

According to Jonathan Carr, author of the forthcoming book The Wagner Clan, Hitler himself was obsessed by "the Master". But the party faithful were not, and had to be dragged kicking and screaming to performances at Hitler's insistence.

"We are all told that the Germans poured into opera houses to listen to Wagner as soon as Hitler came to power. The opposite is true," said Carr.

The party faithful's devotion to Wagner has also been exaggerated, according to Carr. We may think of Wagner as the soundtrack to Nazism, with newsreels of Hitler at Bayreuth and the famous Wagner performances at the Nuremburg rallies. However, according to the memoirs of Albert Speer and Hitler's secretary, Traudl Junge, most Nazis were bored silly at the prospect of watching five-hour-long epics in which, frequently, little happens.

At the 1933 gala performance of Die Meistersinger, for instance, so few turned up that a furious Hitler sent patrols to drag party members out of beer gardens and brothels, according to Speer. And during one performance of Tristan and Isolde, Junge recalled a member of Hitler's group dropping off and having to be rescued before collapsing over the railings of the box they were in. His rescuer had himself been asleep for most of the performance.

The author has analysed the operas performed in Germany in the 1930s. Wagner's works did not come to dominate the output. Instead they had already begun a slow decline during the Weimar period and their fortunes continued to wane.

In the 1932-33 season Carmen was the most performed opera in Germany, with Weber's Der Freischütz in second place. Four Wagner operas were placed next.

But by 1938-39 the highest ranked Wagner opera - Lohengrin - achieved only 12th place. Leoncavallo's Pagliacci was the most popular, Mascagni's Cavalleria Rusticana second, and Puccini's Madama Butterfly third. And, by the war years, it was Verdi, not Wagner, who was Germany's most performed opera composer. The Master's market share dropped to under 10%. "Wagner was already considered by the younger generation to be rather old-hat," said Carr.

It is true, said Carr, that Wagner's music was used at key moments in the Nazi regime. On the so-called Day of Potsdam, the propaganda show staged on March 21 1933 by Goebbels, officially to inaugurate the new Reichstag, the day ended with a performance of Die Meistersinger (at Hitler's insistence; originally a performance of Strauss's Elektra had been planned). The Ride of the Valkyries was broadcast to accompany reports on German air attacks.

Siegfrieds Tod from Götterdammerung would be heard on German wirelesses to announce important deaths - including Hitler's own. And the overture from Rienzi was often heard on ceremonial occasions. But the penetration of Wagner has been exaggerated. Leni Riefenstahl's Triumph of the Will, about the 1934 Nuremburg rally, is often thought of as having a Wagner soundtrack. In fact, most of the music is Wagner pastiche.

Hitler's personal obsession with the composer was, perhaps, partly to do with his identification with Wagner the man: he saw him as a lonely figure who had battled against the odds to achieve greatness. And as a man who clearly understood the power of spectacle he was, according to Carr, fascinated by the "nuts and bolts of the staging" of the operas.

Posted by Vincent Vargas at 7:50 AM