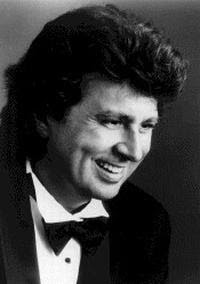 This is from today's New York Times.
Operatic Tenor is Brain Damaged
By Daniel J. Wakin

Jerry Hadley, a major American operatic tenor whose career had waned in recent years, apparently shot himself in the head with an air rifle at his home in upstate New York early Tuesday morning and was seriously injured, the police have said.

Mr. Hadley, 55, suffered brain damage and is on life support, State Police Sgt. Gerry Salmon said today. Mr. Hadley was wounded inside his house in Clinton Corners, near Poughkeepsie, Sergeant Salmon said, adding that the case was being investigated as an attempted suicide.

Mr. Hadley was taken to St. Francis Hospital in Poughkeepsie, Sergeant Salmon said. “The CAT scan and other X-rays they took at the time show some pretty severe brain injury,” the sergeant added. “They do not expect him to recover.”

Mr. Hadley appeared to be having difficulties in the last few years. In May 2006, he was arrested on drunken-driving charges while sitting in a parked car on Riverside Drive in Manhattan, but prosecutors later dropped the case.

In recent months, he had been talking about reviving his career with a move into character roles, according to Neil Funkhouser, an artists’ manager.

“He always seemed to me to be one of the most upbeat, positive people that I knew,” Mr. Funkhouser said. “This comes as a total shock to me. There was nothing that would indicate to me that something like this would happen.”

Others, however, said Mr. Hadley seemed to be in distress, including financial problems, according to the police.

Mr. Hadley created the title role in Mr. Harbison’s The Great Gatsby at The Metropolitan Opera in 1999, and performances in the role in May 2002 were his last at the Met, where he made his debut in 1987.

“He came across, obviously, as a very upbeat character,” Mr. Harbison said, “but you could always tell, in his singing, that there was a lot of complexity to his personality.”

Mr. Hadley, who grew up in Manlius, Ill., began his career in 1976 at the Lake George Opera Festival and made his European debut in 1982 at the Vienna State Opera. His career soared in the 1980s and 1990s, when he became known for a lyric, Italianate style combined with an American clarity and directness.

At the Met, he sang the leading tenor roles in The Rake’s Progress, Così Fan Tutte, L’Elisir d’Amore, La Traviata and Die Zauberflöte, among others. Mr. Hadley sang at the Lyric Opera of Chicago, the San Francisco Opera, the Royal Opera at Covent Garden, the Vienna State Opera, the Teatro alla Scala in Milan, the Salzburg Festival and elsewhere.

Posted by Vincent Vargas at 2:49 PM