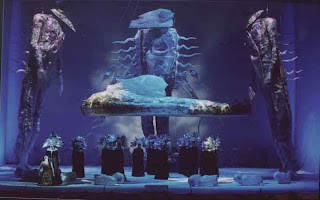 Saturday evening brought the second night of The Kirov Opera Ring to The Metropolitan Opera with a performance of Die Walküre. Several good things happened from one night to the next. For one, the playing of the orchestra improved immensely. Valery Gergiev seemed much more in charge of his ensemble, and the orchestra played a well-balanced, dynamic reading of Richard Wagner's most popular Ring score. Also, it is worth reporting that both Alexei Tanovitsky as Wotan, and Larissa Diadkova as Fricka improved tremendously from the previous night. Ms. Diadkova was especially good Saturday night, as she dominated the stage for her second act scene. She received the biggest hand of the evening.

Joining the ensemble in the first act were tenor Oleg Balashov as Siegmund, Gennady Bezzubenkov as Hunding, and Mlada Khudoley as Sieglinde. They all sang their roles ably, although Mr. Balashov began running out of steam by the end of the act. Mr. Bezzubenkov sounded growly and mean as he should, but his costume, which included some kind of animal fur headgear, made him look silly and not at all the threatening, hulking figure that his voice suggested.

The evening's Brünnhilde was soprano Olga Sergeeva. Her reading of this character is familiar to MET audiences ever since she sang the role in 2005. Her performance was recorded for posterity that year as one of the MET broadcasts. She is an intelligent singer who knows well that artists need to warm up in a role, and that audiences at the MET are very forgiving. Of course, she also has to sing some of the most demanding music ever written for a dramatic soprano right as she steps on stage. Her B naturals and high C's in the "hojotoho" cries were nowhere near the pitch, sounding more like "hojotoho-wah! with the last note being some kind of vocal approximation of what Wagner wrote. It was the kind of sound that can turn you off to the rest of her performance. Luckily she did improve as the long evening continued and did manage to sing a very convincing scene with Siegmund in Act II. As I said: MET audiences are very forgiving.

As far as the sets go, the less said about them the better. George Tsypin's colossal figures dominate the stage once more for no good reason. They don't serve much of a purpose. In Act I three headless and handless figures serve to hold a gigantic rock which acts as the roof to Hunding's hut. In Act II, the figures are now hovering above the action in Valhalla, suggesting perhaps that there are gods above the gods, but this concept goes nowhere. By Act II they have grown heads and, at one point, the inside cavities of their torsos glow as if their hearts were suddenly beating. What this has to do with the opera is anybody's guess. In Act III, the figures have traded their heads for horse skulls while one of the horizontal figures from Das Rheingold rotates aimlessly above the action (see picture above). This figure will later on serve to be the rock where Wotan puts his daughter to sleep. Unfortunately, the sight of poor Wotan precariously balancing himself on this piece of rock reminded me of the church scene in the MET's latest production of Il Trovatore a few years ago when Neil Shicoff was asked to balance himself on a very narrow beam of a cross.

This production, for all its pretty colors and innovative colossal figures makes very little sense. It rather just makes us wish that they would perform the thing in concert without any of these sets. These colossal monstrosities adorn but do not carry any further meaning that is not already present in the music. In other words, they just fill space. I had high hopes for this production concept when I saw Das Rheingold, but now that the Ring is halfway over, I am coming to the realization that this production is half baked and our giant friends hovering above the action are not helping any. George Tsypin is a wondrous sculptor and a unique visionary in the world of art, but somehow through this production he has put himself in competition with Wagner, and that's one helluva guy to be competing against.
Posted by Vincent Vargas at 9:59 PM

Thanks for these comments.

I don't cotton to the "postmodern" notion that the medium is necessarily the message, yet this is the best example of what McLuhan was referring to. That is, instances where messages don't have the weight to compose and transmit themselves in our psyches, so must assert in form and flash what they lack in content.

So it is a tragedy when truly cathartic/transformative "messages," such as Wagner's music, are not allowed to simply witness to/evoke/vibrate what they are. When they are presented like any advertisement for the latest iCrap or underarm deodorant or flavor du moment rock star.

The music is what it is and can carry the cosmos within it. Just let it be. Let it be sublime, sufficient, and awesome.

What frustrates me about these modern stagings is that I always sense that they do not trust me, as a listener/receiver. Do not trust me to have the competence or the depth to reach down and receive the music in this mythic way.

In Wagner's day, the composer could count on Norse mythology as a unifying set of psychological symbols in his audience. It seems clear that such a unifying mythos no longer exists, or it does and we don't want to admit it, because we might be called imperialist or incorrect in our thinking. (As though archetypes can be anything other than just that--psychological tendencies, harmful only when externalized into ideology and action by groups using politics.)

Today's stagings seem to flail about, trying to invoke with excess and startlement some reaction perhaps similar in intensity to that earlier unified catharsis, but very different from it. And certainly more confusing/less transformative. Or perhaps it is that today's stagings are trying to AVOID these engagements with Art, with Depth, with Myth--that is another one of my great fears in the modern world. That is, the stealthy replacement of Art with Style, Depth with Flash, and Myth with Consumption.

The music itself will take us home, so for the love of Loki, why will we not just let it?!

This leads me to a further comment: who has studied (i.e. understood) artistic pieces like Wagner's Ring can appreciate their performance just "closing the eyes", because words and - needless to say - music are more than enough to recreate the esthetic-psycho-philosophical atmosphere buried in the scores...

Even Wagner's own and first staging of the Ring in 1876 did not hit his author's target...

The danger is that the exteriority of Regietheater prevents people from catching the innermost meaning of these masterpieces!