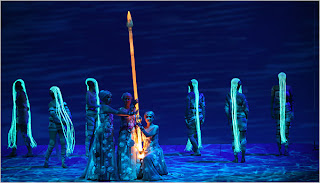 I missed The Kirov Opera's Siegfried, but you bet that I was there for Götterdämmerung, the final music drama of Richard Wagner's monumental Ring of the Nibelung. I am not sure what I missed visually in Siegfried, although I'd be willing to bet that the familiar gigantic monolithic figures were back hovering above the forging of Nothung, the killing of Fafner and the awakening of Brünnhilde. Also, I have no doubt that dramatic changes in stage lighting were happening all over the place. Vocally, I hope that the singers were up to par with the difficulties of Siegfried: an incredibly difficult Forging Song for the tenor, and a ravishing but treacherous duet in the final act. Something tells me that the orchestra was excellent, and that Valery Gergiev, who must have been exhausted after leading two Ring cycles in two weeks, was as brilliant as ever.

Götterdämmerung was as exasperating visually and as musically brilliant as the rest of this Russian Ring. Once again monolithic giants and puny Nibelungs dominated the scene. This time the head of one of the giants rested on his lap. The Norns, who were dressed in really ugly costumes, had help weaving their rope from a small corps de ballet. When we got to Brünnhilde and Siegfried's first scene I noticed that the rock was different from the rock where Wotan had put his daughter to sleep back on Die Walküre. I did not mind that too much, because at least this rock seemed to be a little more solid and secure. I enjoyed the open spaces of the first act, and was hoping that this scenic design would carry on to the second. Wouldn't you know it that for the one act where you need open spaces (the only opera in the entire Ring which features a chorus) the set was cluttered with columns. This led to a rather clumsy scene when Hagen calls forth his vassals. On top of that, the vassals moved into place in single file reminiscent of the seven dwarfs going to work, and the same fire from the end of Walküre showed up once more.

Act three was also not spared from strangeness. The Rhinemaidens bring on a a lighted spear in the first scene (see picture above) which they eventually allowed Siegfried to also handle. Is this what's left over of the gold? Why do they hand it so easily to a total stranger like Siegfried? Over and over again, one is forced to ask these questions of a production that offers no answers.

Through it all, Valery Gergiev led a sumptuous reading of this score, and the orchestra, despite the fact that the players must have been very tired, responded so much better than they had in previous nights.

Among the cast Evgeny Nikitin was a superb Gunther: the best singer on that stage that evening, with a voice that was focused, secured, and able to project to a house the size of the MET. Olga Sergeeva sounded tired at the beginning of the evening, but she improved immensely as the evening wore on. Her Siegfried, Victor Lutsuk, was very good, but at times was overwhelmed by the role. Mikhail Petrenko, who sang Fafner in Das Rheingold, sang the role of Hagen. Physically, he looked threatening, but a darker voice than his is needed for this role.

What a wonderful experience it was to see and hear this Ring. Although this concept leaves a lot to be desired, it was a magnificent and unique opportunity for New Yorkers to experience this work in a new production. In some ways, it has made me appreciate the current MET production a lot more, and it has made me somewhat nervous as to what might replace it in the near Peter Gelb future.
Posted by Vincent Vargas at 5:56 PM