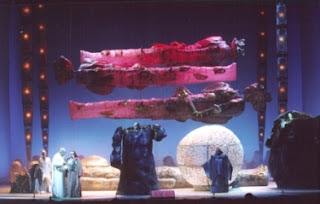 On the same weekend that Russian president Vladimir Putin suspended his country's involvement in the "Conventional Forces in Europe Treaty" thus aggravating, even more, the United States's relationship with Moscow, The Kirov Opera has come to Lincoln Center to present its unusual but captivating production of Richard Wagner's Ring of the Nibelung at The Metropolitan Opera. The kind of visit that in these troubled times proves once again that eternal art can overcome the labyrinths and machinations of politics.

Once upon a time it felt as if New York was at the vanguard of Wagnerian operatic staging. At the time when every opera house had to present the Ring in a Wieland Wagner inspired "dark" production, the Met mounted in 1960's the Herbert von Karajan staging which was based on his own production at the Salzburg Festival. The trouble for New York started when European opera houses began to experiment further, inspired by Patrice Chéreau's landmark 1976 centennial Bayreuth production. Instead of following suit, the MET instead decided to scrap von Karajan's Wieland Wagner-inspired sets (which by the late 1970's had started to look "old-fashioned") and replace them with the MET's current production: a traditional, semi-realistic staging by Günther Schneider-Siemssen. Therefore, since the 1960's, The Metropolitan Opera House has not seen a Ring that has has explored the visual possibilities that an intrepid imagination can muster.

Now, to atone for our sins, the Kirov Opera Ring has come to New York.

The production is a concept of conductor Valery Gergiev and designer George Tsypin. Mr. Tsypin's work is familiar to New York audience primarily from his collaboration with Julie Taymor on the MET's The Magic Flute. For the Ring, Tsypin and maestro Gergiev have imagined a world observed by gigantic, monolithic totem poles that hover above the action. Sometimes, as in Das Rheingold, which I saw last night, the figures are suspended horizontally by very visible wiring, and are moved about to denote a change of scenery. The Kirov Ring seems to be inspired more by Slavic mythology than by the German-Scandinavian sources that supplied Richard Wagner for the inspiration to write the work in the first place. This is fine and dandy, but if that's the case, why do the gods don Egyptian deity headgear as they get ready to cross over to Valhalla at the end of the opera? Lucky for us, the gods did not don horned helmets (as some in the audience decided to wear to last night's premiere).

One aspect of the staging that was very impressive was the use of dancers. Long-haired girls in body suits for the Rhinemaidens, lithe fast moving minions for the giants, shifty creatures with red flames on their heads for Loge, and women carrying empty baskets as a retinue for the appearance of Erda, who in a five foot horizontal headdress wins the award for the most outrages, yet effective costume in the entire opera. The dancers, though used sparingly, added a sense of movement and life to what otherwise would be a very static staging of this work.

Not all is rosy at Lincoln Center, however, but luckily the good outweighs the bad. Fasolt and Fafner, for instance, have to be the ugliest giants ever presented for any Ring: they look like a pair of singing underdone potatoes rolling about on the stage.

The performance was incredibly strong last night, and here's hoping that it is a harbinger of greater things to come in the next few evenings. There was true ensemble singing and acting from all the principals. All the men seemed to have been instructed that the MET is a huge house and that one has to sing louder than at he Mariinsky Theatre. The cast seems to have heard the warning, since volume was not a problem last night. Nikolai Putilin was a memorable Alberich, his booming voice commanding the stage. He received the last curtain call last night, the biggest hand of the evening, and it was well-deserved. Alexei Tanovitsky was a very good Wotan who took a while to warm up to the role and the size of the house. The Loge of Vasily Gorshkov was razor sharp, holding command of the stage during his monologues. Among the women, Freia was beautifully sung by Tatiana Borodina, and Fricka was sung in matronly style by Larissa Diadkova.

Conductor Valery Gergiev was the star of the evening, however, as he led the forces of the Orchestra of the Mariinsky Theatre in a riveting reading of Wagner's score. From the first E flat chord to the triumphal entry of the gods into Valhalla, the energy never waned. Gergiev explored both sides of the musical spectrum: he whipped the ensemble into incredible tuttis, the likes of which I have never heard at the house, and extracted from the players exquisite transparent sounds, downplaying wherever possible the Teutonic soundscape that can often become the cliché of Wagnerian interpretation.

With such excellent musicians at the helm, it is easier for The Kirov Opera Ring to be successful at presenting their eye candy production of Wagner's cycle, as they build beautiful images through monumental sets and inventive lighting. What I would like to ultimately find out is if at the end of the cycle this wonderful Slavic sweet will penetrate and touch the heart. The Ring can sweep any opera goer along with its wondrous epic scale and impassioned music, but the true litmus test of any staging of this massive work is if it ignites a sentimental, personal passion. If the Kirov Opera can do this in New York, in the next few evenings, then it will be a Ring for the ages.
Posted by Vincent Vargas at 9:26 AM

Were we in the same theatre? This performance was all over the place and not worthy of the price of admission. The Vorspiel orchestrally was all over the place, while the Rhine Maidens were terrific, Gergiev was not with them. Putlin, Borodina, Diadakova and Gorshkov were excellent, but Tanovitsky, Tsanga, Skimov, Popov, Nikitin and Petrenko might as well stayed home. The production was acceptable but odd. The Kirov might have benefited with an earlier arrival in New York and alot of rehearsal, which Gergiev did not deem necessary. The chorus has yet to arrive in New York for the Goetterdammerung. If you plan to charge premium prices, you damn well better have a cohesive performance worthy of the entry price!

The singers, on the whole, were more acceptable, shall we say, than the production which now that I have seen Die Walküre, begins getting on your nerves. Vocally, any Ring is going to difficult to stage these days. I thought the Kirov Opera did a creditable job on Friday.